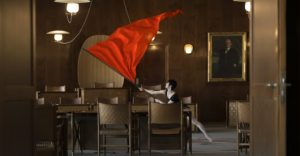 Last summer, Montreal celebrated the 50th anniversary of Expo 67, a monumental event that put the city at the centre of the international stage. Jasmina Cibic’s latest project—created expressly for the Foundation’s exhibition spaces and the Montreal milieu—is an immersive installation that explores the production of national culture and its instrumentalization for political aims in the context of 20th Century World Expositions. The exhibition’s title, Everything That You Desire and Nothing That You Fear, is drawn from political discussions and agreements in the planning stages of Expo 67 about what each country should show to the international audience.

Expo 67 was also the last international exhibition at which the former Yugoslavia had a pavilion prior to its dissolution in the 1990s—its final act of staging where the country presented, each time under a different name, at four political blockbuster World Expositions: 1929 Barcelona, 1937 Paris, 1958 Brussels, and 1967 Montreal.

Yugoslavia’s renaming—and finally its disappearance—becomes a lens through which Cibic studies the aesthetic permutations within art and architecture as “soft power” and statecraft strategies used to achieve the ultimate display of dominance for international audiences. How are a state’s interests and rhetoric deployed through art and architecture to shape public perception of a place? How do governments instrumentalize culture for the formation of national identity and representation? Cibic’s artistic methodology involves archival research and collaboration with a variety of specialists, through which she creates sumptuous Gesamtkunstwerke (total works of art) that combine the potencies of installation, sculpture, photography, performance and film. The overall effect simultaneously captivates the visitor and reveals constructs that are fashioned and implemented by governments for hegemonic control.

Cibic will make conceptual use of the Foundation’s two very different buildings to draw comparisons and underscore tensions between the spaces of state-sanctioned public structures (which are often inaccessible) and the private space of the home where the ghost-like machine of state politics permeates. The four-storey building at 451 Saint-Jean will be re-imagined as the residential dwelling of an unnamed collector who has assembled imagined artefacts from the four Yugoslav Expo pavilions. Making use of the intimacy of the spaces, each gallery will be draped in a curtain populated by an “ornamental rash”—a collage of images Cibic assembles from key artworks that were assigned the role of Yugoslav national representatives in the context of the World Expositions. Sculpture, photography and kilims (flat woven textiles) that also reference architectural and design works created for these pavilions will also be found within each of these boudoir-like spaces, highlighting political permeability into private space. On the fourth floor, a new film focuses on the disappearing act of a (nation) state. Produced specifically for this exhibition, the film questions the leftover scenographic debris and the political backdrop left behind after a country’s disappearance—the clearly formed aesthetic and architectural language that ultimately loses its client, the nation state. Cibic shows a recreated model of the Yugoslav pavilion for Expo 67 as an illusionist device where a female magician becomes an allegory for a nation state depicted through the disappearing female body. This allows the artist to further investigate the poetic connection between statecraft and the fostering of illusion.

For the contrasting, expansive, gallery spaces at 465 Saint-Jean, Cibic will present Nada (“hope” in Croatian), her most recent film trilogy that examines the architecture, music and dance created in the service of national representation at decisive moments of European identity crises. The films are presented within an immersive installation that expands their scenography and props into the physical space of the galleries. The artist will also present a performative installation that features a monochromatic landscape composed of images taken by Yugoslav state photographers following President Tito on his diplomatic missions. This fictitious landscape, which depicts the territories of member states belonging to the Non-Aligned Movement, is inhabited by various architectural structures in their building phase, described by Cibic as “masterpieces that were to serve the creation of memory of the multination state in its becoming.” The mural will also bear political statements drawn from transcripts of discussions between Yugoslav politicians and the architects employed by the state. As part of the performative aspect, a group of women artists will be gilding a selection of these slogans onto the mural and calling them out, ascribing bodily presence to the otherwise lacking female voice in the construction of the patriarchal spectacle.

Within her works, Cibic brings together a range of strategies including scripting, enacting and re-enacting to draw connections between ‘statecraft’ and stagecraft. Through a critical, feminist unpacking of the complex entanglements of art, gender and state power, the artist encourages viewers to consider the strategies employed in the construction of national culture. Cibic’s proposal is especially pertinent in our current situation of increasing nationalist fervour around the world, and poignantly resonant in the Canadian context where a sense of national identity is in constant flux.

Everything That You Desire and Nothing That You Fear is supported by the Graham Foundation for Advanced Studies in the Fine Arts and the Museum of Yugoslavia.