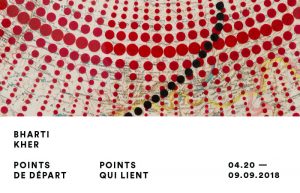 Bharti Kher is known internationally for her signature use of the bindi in works across painting and sculpture. Derived from the Sanskrit word bindu—meaning point, drop, dot or small particle—and rooted in ritual and philosophical traditions, the bindi is a dot applied to the centre of the forehead as a representation of a spiritual third eye. Originally applied with natural pigment, bindis have transformed over time to become a popular, mass produced accessory. Kher reclaims this way of seeing by creating intensely layered and lavish ‘paintings’ that are charged with the bindi’s conceptual and visual links to ideas such as repetition, the sacred and the ritual, appropriation, and a deliberate sign of the feminine. The bindi becomes a language or code we begin to read through works that elicit formal connections with abstract expressionism, op art, and geometric abstraction from Western painting and the tantric and neo-tantric traditions of India. Kher states: “I activate the surface for you to imagine the microcosmic and macro. Remember also that the work looks back at you.”

A selection of bindi paintings will be on display at the Foundation, including the Heroides series (2016), which refers to Ovid’s The Heroides. This collection of epistolary poems is written in the voice of the heroines of Greek and Roman mythology, who address and respond to their lost, left, and imagined lovers. An ongoing series of map works that cover and mask Mercator world maps will also be exhibited for the first time. The application of bindis mark, scar, and punctuate territories and borders, questioning the north/south polarities of country and nation, as well as the visual misrepresentations of a European geodesy.

Kher’s sculptural practice also makes use of the readymade in multiple ways. Her ‘portrait sculptures’ (2012-2016) are cast concrete pedestals draped with the sari, the unique South Asian garment that is tied and worn from a 5.5-metre length of unstitched fabric. In this instance, the sari becomes the signifier of the personal and the proxy for the absent body. The night she left (2011), one of the works in the series, is a reclaimed wooden staircase that Kher marks with a cascade of red bindis. A twisted sari weaves around an upturned chair, evoking the narrative of the work’s title.

Also presented is the colossal work An absence of assignable cause (2007), an imagining of the anatomic heart of a blue sperm whale, made to scale and enveloped in a skin of bindis. At once the biggest heart in the world and an inquiry of love, this work offers the paradox of seeing with the inner eye into the heart of the other.

Bharti Kher’s work underlines the productivity of disparate combinations in disrupting a world that insists on defining human experience and its cultural expressions. Through subtle clues and formal seduction, she explores a multitude of themes including hybridity, the spectrum of the female body, and the nonphysical in the material world. This exhibition also gives us an opportunity to engage with other urgent questions through art: with the contradictions in male/female dynamics; with cultural appropriation and the ways we look at the other; and, essentially, with empathy. As a vibrant and playful city full of contradictions and mixes, Montreal provides a particularly poignant context for Points de départ, points qui lient.

Born in London, England in 1969, Bharti Kher studied at Middlesex Polytechnic, London, and later received her BA Honours in Fine Art–Painting from Newcastle Polytechnic in 1991. She moved to India in 1993 and continues to live and work in New Delhi. She has exhibited extensively internationally, and her work is held in major collections around the world.