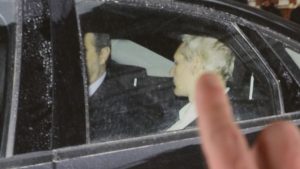 The Delfina Foundation is delighted to present an exhibition of new work by Canadian artist, Jean-Paul Kelly. Exploring the relationship between materiality and perception, Kelly examines complex associations between found photographs, videos, and sounds from documentaries, photojournalism, and online media streams. By working through these documents, Kelly seeks to illuminate the gap between physical matter and the subjective experience of it in the world.
In this new installation, That ends that matter, Kelly questions documentary practices in UK courtrooms through a three-channel video and works on paper.In winter 2015, whilst in residence at Delfina Foundation, Kelly attended City of London Magistrates’ Court in Central London for eight weeks as a visitor, during which time he observed the daily events in one courtroom. The UK’s Criminal Justice Act forbids all recording and sketching in court, allowing illustrators to only take notes; Kelly employs this restricted form of recounting as both a structural and poetic device for his work. In a world of ubiquitous image production and ready access to information, these courts of law are peculiar places. They force representations to be made on the basis of abstract observation and memory, generating images that are constituted by the contradictions of being shared and personal.
In That ends that matter, the eight-minute, three-channel video is constructed of a re-enactment of actual events which the artist witnessed in court; photographic material from online image streams used to retell the sensed experience of those events; and a visual music animation where geometric shapes copied from these re-enactments are drawn directly onto the optical soundtrack of 16mm film to produce a score.
As Jean-Paul Kelly explains: “The primary goal of my work is producing a fair account of my experience of the world. My inquiry is not related to redundant claims of indexical truth but rather to the repositioning of artifice, desire, and bias as the material source for realising the form of the work. That ends that matter is an attempt to document a certain form of subjective sense.”
Delfina Foundation
29/31 Catherine Place
London SW1E 6DY
United Kingdom
Delfinafoundation.com