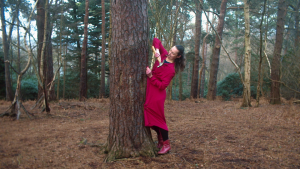 Delfina Foundation announces the third edition of its thematic programme, The Public Domain. One of the four themes that define Delfina Foundation’s integrated residency and public programme, The Public Domain was first initiated in 2014 and explores notions of the public, citizenship and collective action, as well as the changing nature of public space, both in the physical and virtual sense.

Running through autumn 2018, this latest iteration of The Public Domain is subtitled Gender, Power, and Place with ideas being explored through the season’s exhibition, events and residencies.

Delfina Foundation presents the London premiere of The Scar (2017), a five-screen fiction film installation by Noor Afshan Mirza and Brad Butler. Comprised of three chapters, the film investigates structures of power—engaging with issues of patriarchy, inequality and corruption—and ultimately proposes a post-patriarchal future.

Mirza and Butler were residents at Delfina Foundation in 2015 as part of the second season of The Public Domain, during which time they began to develop The Scar.

Alongside the exhibition, there will be an associated programme of workshops, reading groups and talks exploring gender, power and place, devised by Mirza and Butler. More details will be published shortly on Delfina Foundation’s website.

Exploring the larger theme of gender politics, Peter Brandt’s (Denmark) long‑term practice involves an investigation of masculinities using feminist methodologies, trauma theories, and art historical archives. Alex Baczynski-Jenkins (Poland/UK) combines his choreographic practice with queer politics, often taking social and everyday performances that enact fantasy, embodiment, and desire. As the recipient of the Frieze Award 2018, Alex will work on a newly-commissioned performance piece that will be presented at the fair in October.

Power relations and its inequalities are recurrent themes in the pratice of both Maja Bekan(Serbia/The Netherlands), who explores the nature of collaboration through different types of social structures such as Tupperware parties, and Urok Shirhan (Iraq/The Netherlands) who examines identity, migration and issues of misrepresentation and neutrality. Meanwhile, Madhu Das (India) is concerned with the projection of identity within the social world, adapting aspects of material culture, anthropological methodologies and allegorical fiction as conceptual tools.

The concept of place in the virtual or physical sense, in the past or present, is explored by several resident artists. Laura Belém (Brazil) considers the perception and meaning of place through the gaps that are often found within art history, tackling ideas of presence and absence in memory, displacement, time and transience. Taro Izumi’s (Japan) multimedia installations create imaginary places, involving an absurd composition of everyday elements and unexpected items that humorously thwart our artistic and social customs. Finally, Zuza Golinska (Poland) explores the relationship between bodies, architecture and the nature of control, often delving into social behaviours in the public realm through site‑specific sculptural works.

In addition, as part of Delfina Foundation’s on-going programme Collecting as Practice, Carlos Marsano (Peru) will be a collector-in-residence.