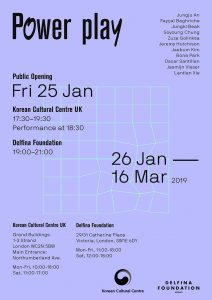 A major group exhibition, across two London venues, exploring the power dynamics at play in relationships between individuals, institutions and the state.

Delfina Foundation and the Korean Cultural Centre UK (KCCUK) are pleased to present Power play, an exhibition across both venues featuring solo and newly-commissioned collaborative works which expose, trace and interrogate power dynamics through humour, subversion and provocation.

Curated by Aaron Cezar, Director of Delfina Foundation, Power play takes its cue from Jacques Derrida’s The Politics of Friendship (1994), in which the philosopher approaches the notion of friendship as a way to rethink the political, drawing connections between friendship, citizenship and democracy. Such ideas are particularly pertinent to the activities of the exhibition’s partners: Delfina Foundation, as an international artist residency based in London; KCCUK, which seeks to promote understanding of and relations with Korea in the UK through cultural and educational activities; and SongEun ArtSpace in Seoul, a long-time residency partner with Delfina Foundation, which pioneered the project and staged an iteration of the exhibition in late 2018.

Spanning a wide variety of media, the artworks address relationships between people and the environment, artists and audiences, guests and hosts, individuals and states, and between states themselves. In addition to solo works by all participating artists, the exhibition features specially-commissioned collaborative works by artists who first met whilst in residence at Delfina Foundation exploring the nature of their friendship and the relationship between their respective practices.