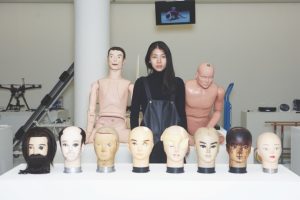 In her practice as choreographer, dancer and performer, South Korean artist Geumhyung Jeong constantly renegotiates the relationship between the human body and the objects that surround it. She has built up a collection of plain everyday objects upon which she bestows a bizarre, disconcerting life through an intense and risky interaction with her own body to challenge notions of sexuality, technology and the female body.

In 2016, Jeong exhibited her complete collection at Atelier Hermes in Seoul as the recipient of the Hermès Foundation Missulsang Award. For this new installation at Delfina Foundation, emerging from a residency supported by SongEun Art & Cultural Foundation, Jeong explores the relationship between her ‘collection’ and her creative process. Jeong has selected ‘unperformed objects’ – mannequins, vacuum cleaners, training machines and medical apparatus with a latent potential. The exhibition brings the narrative of these objects themselves into play, alongside decision-making and failure in the process of making performances.

In this light, the ‘unperformed objects’ become a collection of relics of a notion of civilization that Jeong seeks to challenge.

Coinciding with her solo exhibition at Delfina Foundation, during Frieze Week Tate Modern will present 7ways, a solo performance by Jeong in the form of seven ‘duets’ with everyday objects that take on an unsettling life of their own. The two ticketed performances at Tate Modern punctuate a week-long free presentation of Jeong’s work in the Tanks.