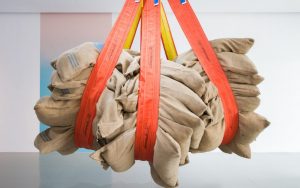 An exhibition exploring the inequalities in the global food system.

The exhibition takes its title from the work of the eminent Marxist Professor David Harvey. In his 2003 book, The New Imperialism, Harvey introduces the concept ‘accumulation by dispossession’ to describe the increasing feature of global capitalism to concentrate wealth and power in the hands of the few through the process of dispossession. During her 2014 residency at Delfina Foundation, Molinos related this concept to her on-going research into the food system, the outcome of which is this exhibition.

Accumulation by Dispossession maps a route through different aspects of the global food system, addressing issues of privatisation, financialisation, the management and manipulation of crisis, as well as redistribution. Using a variety of media, including drawings, videos, sculptures, photographs and textiles, the works are a combination of hand-made, machine assembled and computerised, reflecting the different inputs and influences within the food system itself.

Accumulation by Dispossession is part of Delfina Foundation’s latest iteration of the thematic programme The Politics of Food, which will run from 1 April – 23 June 2019, curated by Dani Burrows. Acknowledging that the food system is broken and seismic systemic change is an inevitability, the fourth iteration of The Politics of Food, subtitled Adapting, will explore responses to the changing environment of food production. Alongside the exhibition by Asunción Molinos Gordo, the programme will feature residencies, talks, and workshops. The full programme will be published shortly.

Asunción Molinos Gordo (b.1979, Spain) questions the categories defining “innovation” in mainstream discourses today by exploring the different forms of intellectual enquiry from the urban to the rural. Driven by a strong desire to understand the value and complexity of the rural as well as its cultural production and the obstacles that lead to its marginalisation, Molinos works in a range media including installation, photography, video, sound and other media.

Molinos obtained her BFA from the Universidad Complutense de Madrid, where she also pursued her Master in Contemporary Art Theory and Practice. She is currently represented by Travesia Cuatro gallery and lives/works between Egypt and Spain.

In 2014 Molinos was a resident at Delfina Foundation, during the first iteration of The Politics of Food thematic programme.