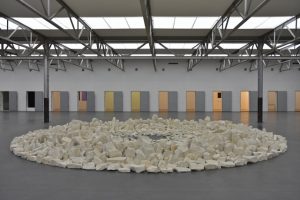 The basis of Long’s work is always a simple geometric form: the circle, the line, the spiral or the cross – minimal forms that stand out in the landscape because they have been produced by human hands. Long has left them behind on his endless walks throughout the world: circles of stone and wood in France, in Alaska or in the mists of Scotland; a meandering line on a stony plain in the Sahara and a line of water poured onto a small bridge in the Italian Alps. All of the works are photographed by Long, and these photographs are shown in galleries and museums. He also brings his works into the museum in other ways, by arranging the stones or branches gathered in nature into clearly defined strips or circles. Richard Long also makes drawings and paintings using river mud.