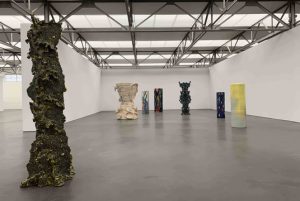 In celebration of the European Ceramic Work Centre’s fiftieth anniversary, De Pont museum is presenting the work of three generations of German artists who joined the centre’s artist-in-residence program in the past decades: Norbert Prangenberg (Nettesheim, 1949 – Krefeld, 2012), Markus Karstieß (Haan, 1971) and Stefanie Brehm (Bamberg, 1980). Both Karstieß and Brehm were strongly influenced by Prangenberg, but this is the first time that their work has been shown together. The three artists all produce large, monumental sculptures that resemble figures or columns. In handling the wet material each uses a different technique – modelling, coiling or throwing – to build the work upward. The exhibition pays tribute not only to ceramics but also to this institute that inspires and challenges artists to work with clay.

The most recent EKWC resident, Stefanie Brehm, is also the youngest participant in the exhibition. The large ceramic discs and columns thrown by her mainly serve as smooth two- or three-dimensional surfaces for abstract paintings, executed in brightly colored glazes. This is an exciting process: the final result remains unknown until the work has been fired.

Brehm studied with Norbert Prangenberg, who had been teaching as a professor at the Akademie der Bildenden Künste in Munich since 1993. Prangenberg was well known as a painter in the German art world and participated in documenta 7, curated in 1982 by artistic director Rudi Fuchs. During the 1990s, Prangenberg started working in plaster, concrete and ceramics. This led to several work periods at the EKWC, where he concentrated on elementary ceramic forms and techniques: vases made of clay coils. Only their size was out-of-the-ordinary. Using an extruder to produce hundreds of meters of clay coils, he turned these into large expressive, both reclining and upright sculptures that are reminiscent of vessels but also human figures.

Karstieß’s relationship with Prangenberg was a more personal one. At the opening of a retrospective of Prangenberg’s work at Keramikmuseum Westerwald in 2019, Karstieß was among the speakers. On succeeding Prangenberg as professor in München in 2015, he actually took over the class that Brehm was attending. Their works share the quality of showing traces of the hands that manipulate the clay. Karstieß builds sculptures by kneading the clay and attempting to do the same thing with each hand. This results in abstract figures reminiscent of Rorschach tests or totem poles.

The EKWC was founded in Heusden on December 4, 1969 as the Ceramic Workplace. In 1991 it became the European Ceramic Work Centre on moving to ’s-Hertogenbosch. Since 2015, the centre has been based in Oisterwijk. As a center for expertise and a post-academic institute, it is dedicated to the development of ceramics in art, design and architecture. Its artist-in-residence program welcomes participants from all over the world, including well-known artists such as Marien Schouten, Rob Birza, Guido Geelen, Anish Kapoor, Berlinde De Bruyckere and Bettie van Haaster, who are all represented in De Pont’s collection.