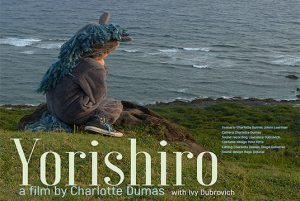 Yorishiro 依代 is a sequel to the film Shio 潮.Together the films are part of a project consisting of three short films in which the location, the small Japanese island Yonaguni where wild horses roam, plays a prominent role. In Shio these horses and a Japanese girl seem to be waiting for something or someone. In Yorishiro and in Stay (working title, not yet filmed) a young girl and a slightly older one arrive separately on this remote island.

A ‘Yorishiro’ is something which or someone who temporarily or permanently holds the spirit or soul of ‘kami’ or (nature) gods. ‘Yorishiro’ moreover signifies transformation by metamorphosis. The younger and the older girl each change in a different way due to their stay on the island and the journey to it. Their arrival also causes the island itself to change.

About this film trilogy Charlotte Dumas says: “In late November of last year I visited Japan in order to show the film Shio to everyone there who had made this production possible. That’s when I spoke with Yuko Kitta  – who had previously made the obi for me which appears in Shio – about my idea of making a horse costume for the little girl, who thinks that she’s a horse, and about the importance of that horse costume, the importance of a costume in relation to transformation. This, and my experiences in Japan, inspired me to write a short story about a little girl who undertakes a journey to Yonaguni in a horse costume and finds her herd there. The inspiration stems from the costume itself, which has its own identity as an object, as well as from my own nearly five-year-old daughter who went around in a horse costume and behaved only like a horse for months.”

Yorishiro is uncomplicated and light in character, and it provides beginnings of a second narrative which has a more serious tone and constitutes the third part of this film project. Each of the short films can be seen independently, but they overlap visually in many respects.