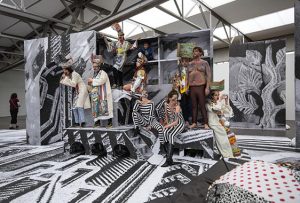 This is the first extensive solo exhibition of Monster Chetwynd (London, 1973) in the Netherlands. The artist, formerly known as Spartacus and Marvin Gaye Chetwynd, chose in 2018 Monster as her first name, since she became – to put it in her own words – ‘suddenly this monstrous blob that meets people and engulfs them.’ Immersing the viewer in an exuberant, picturesque and captivating universe, Chetwynd may well be the most respected British performance and installation artist of our time. Nominated for the Turner Prize in 2012, she adorned the entrance to Tate Britain last winter with two giant luminous slugs that had left a slime trail across the entire classical façade of the museum as ‘Christmas decoration’.

In recent years Chetwynd has developed a reputation with her adaptations of key moments in cultural history, carried out in improvised performances for which she creates the scenery and costumes herself. For these carnivalesque appearances, she collaborates with a group of amateur actors, among them friends and family members. ‘I would say I will work to my last breath to urge the human race to enjoy company, warmth and humor. It is a radical, uplifting political action to prioritize humor. I am anti-stuffiness, anti-pretentiousness. I do not wish to intimidate. I aim to include. I make performances and art that lift morale: a natural tonic, a portal to buoyancy and human bonding, unstoppable surges of courage and bravado, that seem irresponsible in the face of the current reality, but also are a useful ingredient if we are to be energised to program change.’

The exhibition at De Pont promises to be a multifaceted and talked-about presentation of Monster Chetwynd’s work.