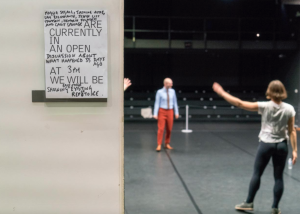 The Season of Cartesian Weeping, is a group exhibition that invites 5 artist collectives to reveal their respective methodologies for producing the platforms and conditions necessary for more discursive forms of practice. It is an exhibition that examines the tools and protocols of self-organisation that these collectives depend on, rather than the object based outcomes they produce.

In Anne Boyer’s 2018 essay, The Season of Cartesian Weeping, the author describes perpetual tears as a side effect of the medication she used during her battle with cancer. Despite her sadness, disease has bullied her into a Cartesian dualism (Descartes’ theory of a mind-body split) that separates cause from effect and denies her any sorrow. But rather than fight her body to grant space for her grief, Anne Boyer simply adds tears of emotion to the mechanical tears that constantly flow. Once shed, she asks, “can the tears of sadness be extracted from the general waters anyway?” This sly refusal, revives her agency and reimagines the mind and body in unison; a new disposition as discrepant to the authority of the disease.

In the manner of Anne Boyer’s refusal, this exhibition prompts a reconsideration of how we understand our bodies and their agency at a time when techno-capitalism increasingly builds in division between people and outsources our communication via codified systems of likes and shares. This exhibition also recognises the paradoxical status institutions and territories for art hold; as simultaneously open spaces to play out political dissent whilst also sustaining and upholding many of the problematics that art intends to critique. These five organisations attempt a form of self-instituting that utilises the body (its speech, its movement, its action) and demands more discrepant forms of knowledge production in order to evade the relentless market capture of ideas, language and sociality that defines our current political climate.

Under the borrowed title The Season of Cartesian Weeping, Hana Noorali and Lynton Talbot invite Am Nuden Da to offer a provisional outing of Let’s Not Dispute The Useless. …, a series of exhibitions conceived, staged, documented and distributed as language only. A project that has been in development and under discussion since 2013.

East London Cable, who explore the potential of the TV studio to operate as a locus for community-building and knowledge exchange, in a contemporary media climate that is dominated by global corporations presenting homogeneity under the guise of choice.

-f-r-i-e-n-d-s- presents a reorganising of the physical architectures of The Wayward Canon, which was itself an artist-led platform for event-based interventions in cinematic practices founded in 2001 by Mark Aerial Waller. Through both denials and concessions to authorship, -f-r-i-e-n-d-s– simultaneously resists easy categorisation and confers new status on the materials presented.

OFFSHORE offers its structure and its language; a graphic presence that articulates its architectures as such. If OFFSHORE’s knowledge is kept in the bodies of its participants, the textual framework presented here can be read as its score. Considering itself a ‘school for embodied knowledge’, it asks; how might we live, work and perform without falling into the traps of exploitation, found within the neoliberal machinery of exchange?

And Parrhesiades, who have invited Johanna Hedva to produce a project across its 4 sites called Reading is Yielding. Its materials are the voice, private libraries, self-destructing messages, video, gifs, astrology charts, taxonomies of mysticism, and secret knowledges. In a private residence in SE5, in the gallery of DRAF, online at parrhesiades.com and later in a Parrhesiades publication, the project communes with different kinds of reading.

Here, then, five organisations have been asked to ruminate on their own working practices. Whether it is in the consideration of poetry as a methodology, fiction as a form of resistant politics, the offer of multiplicity over homogenisation or by instigating ways to privilege the discursive over the aesthetic, Hana Noorali and Lynton Talbot aim to highlight the role language itself plays, and in what way it too can be discrepant to the dominant infrastructures that frame our experience and codify our behaviour in the world.