Daiwa Foundation: Susumu Matsuura “The inkblot looked like me” 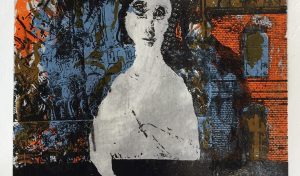 Susumu Matsuura’s theme is “humans”, and most of his work expresses human emotions. He is interested in looking at the two-sided nature of human beings, who harbour both positive feelings and greed.

In 2016, Susumu’s hand-produced silk screen artificial propagation city was displayed in Tokyo. This work was based on his view that even natural objects found in cities have been put there artificially.  The theme of this work is that all objects there are operated by human hands.

Susumu went on to produce a series of works called Caress a Cat, which explores the theme of “healing”, expressing the stress and loneliness he felt while traveling across Europe.

After travelling to Japan, he produced the work Archives of the amorphous clouds of people, a woodblock print depicting the similarity of faces in a crowd whom he photographed in sightseeing spots while in Europe. The work presents an image of people gathered in a “location”, which is also created by people, as a kind of moving swarm.

The works on show at the Foundation have “human feelings” as their main theme: symmetrical portraits inspired by the Rorschach test; the feelings of depression that the artist himself has experienced; or the healing process of pet therapy, as in Caress a Cat.