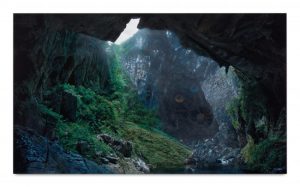 The Daiwa Anglo-Japanese Foundation is delighted to introduce the London-based Japanese artist Naoya Inose to the UK public.

The main work in this exhibition, Ave Maria, depicts a Ferris wheel quietly enshrined in a huge cave. This Ferris wheel left by humans is a metaphor of humanity itself and it slowly rotates, climbing up and plunging down from top to bottom. Indeed, the Ferris wheel embodies the time constraints by which humanity is bound; it just constantly repeats its circular movement.

If life and death are the motif of the Ferris wheel, the Ferris wheel in the work Ave Maria has stopped, and time restrictions no longer exist. It has become an onlooker that quietly stares out of the cave. It is as if it is expecting slowly to become part of nature without being exposed to the sunshine.

Naoya Inose (b.1988) graduated in 2012 from Tokyo National University of Fine Arts and Music, where he specialized in Oil Painting, and received his MA (Fine Art) at UAL Chelsea College of Art And Design in 2017. Inose was a participant in the 21st DOMANI, and his works have been exhibited in museums including the National Art Center Tokyo and Takamatsu City Museum of Art. His works are included in the Takahashi Collection and at the Benetton Foundation. Inose’s work explores the tension between the natural world and its grasping appropriation by human influence. Inose uses oil painting techniques to create both meticulously realistic landscapes and abstract oil paintings on canvas. His works of art make us question our relationship with and understanding of nature. Inose also creates a debate on the role of original masterpieces and how this has changed in the contemporary postmodern world.