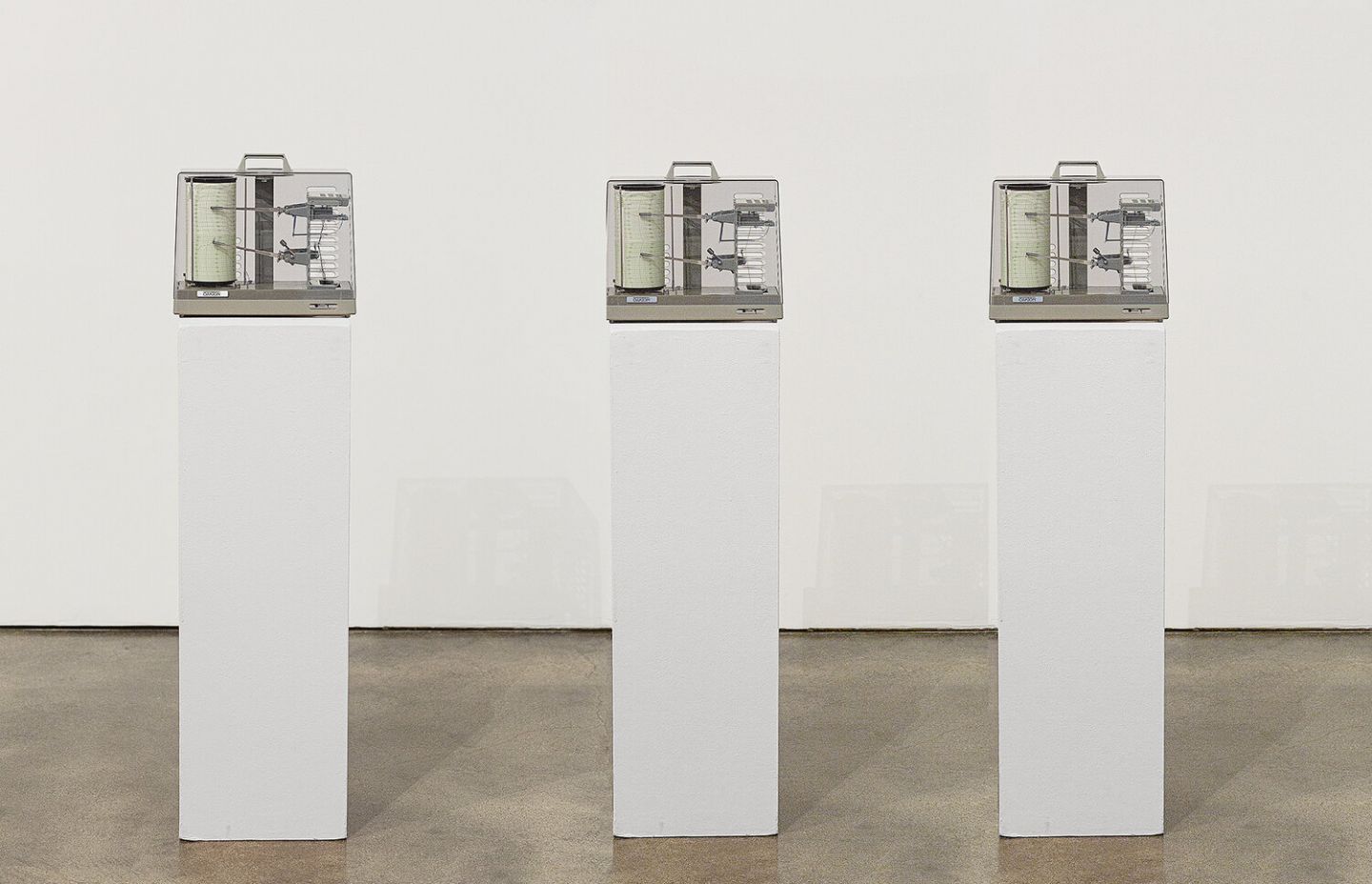 CUE Art Foundation is pleased to present Forms of Regulation and Control, Yara El-Sherbini’s first solo exhibition in the U.S., curated by Naeem Mohaiemen. El-Sherbini’s practice draws upon interactive artworks, using humor and play to reveal the social systems that produce unconscious bias. Her gallery interventions untangle the ways our environments are regulated, and gesture toward the biases inherent in speech, visualization, and surveillance.

El-Sherbini’s playful, minimalist work underscores how insidious forms of knowledge-based control continue, in spite of recent efforts to decolonize the sciences. In Other Forms of Regulation and Control, El-Sherbini displays three hygrothermographs: inconspicuous machines used by museums and galleries to track and regulate the temperature and humidity of an exhibition space as part of protocols to protect artwork. Data is collected using a piece of human hair (typically hair classified as “Asian”), and any fluctuations in the environment are traced on graph paper. At CUE, El-Sherbini has replaced the hair in the machines with hair from the three “scientifically” classified ethno-hair categories: “African” (also classified as “Afro” in some studies), “Asian,” and “Caucasian.” In rupturing museum protocols, the artist questions the methods of monitoring artwork in public spaces, while also revealing how the idea of “race” always needs to be examined and untangled.

In Questioning, multiple choice questions are presented on colorful posters, replicating game cards in popular board games. In a startling mix of veiled sarcasm and off-the-wall answers, El-Sherbini uses the time gap between reading the question and finding the answers to have visitors reflect upon their biases surrounding current events. The work OCCUPIED/FREED replaces the lock on CUE’s restroom with a lock that states the lavatory is either “occupied” or “freed” in red and green letters, reminding viewers of the ways borders mark ownership over the movement of people within geopolitics. In his curatorial essay, Naeem Mohaiemen writes that El-Sherbini’s projects ”have seemingly gentle, friendly surfaces, with shards of discursive turmoil underneath. Works appear as an innocuous object and game, but start to think of the implications and your reaction will be a slight shock.”

CUE often invites artists to curate solo exhibitions of emerging artists’ work. In 2009, DJ Spooky curated Mohaiemen’s first solo show (Live True Life or Die Trying), at CUE Art Foundation. A decade later, CUE invited Mohaiemen to, in turn, curate an exhibition, for which he invited Yara El-Sherbini. Mohaiemen previously curated her work in System Error: War is a Force That Gives us Meaning (co-curated by Lorenzo Fusi) at Palazzo Papesse, Siena, in 2007. In preparation for this exhibition, El-Sherbini and Mohaiemen collaborated on a new work for CUE’s 2020 virtual benefit and auction, titled Passing Comment.

Naeem Mohaiemen (b. London, works in New York) combines essays, films, photography, and installations to research the idea of elusive utopias, shifting borders, rhizomatic families, and unreliable memory. His work exhibited at Mahmoud Darwish Museum (Ramallah), Bengal Foundation (Dhaka), SALT Beyoglu (Istanbul), Tate Britain (London), MoMA PS1 (New York), and documenta 14 (Athens/Kassel). He was a 2014 Guggenheim Fellow, and a finalist for the 2018 Turner Prize and the 2019 Herb Alpert Award. He is currently a Senior Fellow at Lunder Institute of American Art, Maine, and on the board of Vera List Center for Art & Politics, New York, and the film council of ICA, London.

The exhibition will be accompanied by a 32-page color catalogue, with texts by Yara El-Sherbini, Naeem Mohaiemen, and Rosa Boshier. The catalogue will be available online and free of charge to gallery visitors. For more information please contact Programs Manager Lilly Hern-Fondation at lilly@cueartfoundation.org.