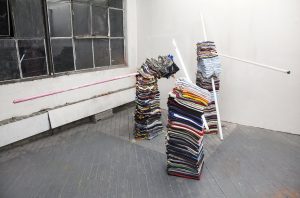 CUE Art Foundation is pleased to present Good Morning, China! (早上好，中国!), a solo exhibition by Yang Mai, curated by David Humphrey. Mai recycles deadstock business suits, athletic wear, and school uniforms, garments selected by the artist to signify societal roles and systems of control. Drawing upon his experience growing up in Guangzhou, China, where he studied fashion and continues to source his materials from a shuttered clothing factory, Mai reimagines these materials as chains of balloon-like forms or precarious stacks of neatly folded garments impaled with fluorescent tube lights and folding chairs.

In Break-mold (锁链), black blazers are stitched together at the openings of the sleeves and threaded through one another, resulting in a tangled heap of rigid limbs and torsos. Similarly, Where’s Happiness 1 (幸福在哪里 1) interrupts the gallery space with jackets bound together at their openings, stretched into horizontal barricades, and smeared with monotone washes of fluorescent paint. The sculpture, stuffed with spray foam and coated with spray paint in shades of bright yellow, orange, green, and blue, recall masses of bodies stiffened by rigor mortis or linked together to form a human barrier. Meanwhile, sculptures such as UpRise 7 (站起来 7) stand in vertical opposition, constructed from carefully piled polo shirts which have been violently punctured with a metal school chair.

Mai’s sculptures represent the restriction, conformity, and authority that clothing can enforce on its wearer. However, the arrangements of these inflated forms also suggest bodies that are voluntarily entangled with one another, whether in a show of collective resistance or that of a communal gathering. Yet, the hollow appearance of their forms implies another type of resistance: the rejection of their intended use and independence from the human body. In her catalogue essay, Gaby Collins-Fernandez writes, “Mai’s work proposes aesthetics as a means toward radical freedom from the perspective of clothes: liberation from having to be filled by bodies, a refusal to participate in commercial distribution, and the request to be considered on their own terms.”

Yang Mai is an artist born and raised in Guangzhou, China, and currently based in New York City. Mai holds a Master’s degree in Fashion, Body, and Garment from the School of the Art Institute of Chicago (2016) and a Bachelor’s degree in Footwear and Accessories Design from the Beijing Institute of Fashion Technology (2014). He was featured in a solo exhibition titled Made in China at Chashama Gallery, New York, NY, in 2017, and his work has been presented at New York Fashion Week in 2018 and 2019. He has participated in group exhibitions at Aqua Art Miami Fair, FL, 2018; Gallery MC, New York, NY, 2018; The Design Show, Chicago, IL, 2016; and a two-person exhibition at Sage Studios, Chicago, IL, 2016. His work has been included in The New York Times, WWD, Vogue, Esquire, and more.

David Humphrey is a New York artist who has shown nationally and internationally. He has received a Guggenheim Fellowship and the Rome Prize, among other awards. An anthology of his art writing, Blind Handshake, was published by Periscope Publishing in 2010. He teaches in the MFA program at Columbia University and is represented by Fredericks & Freiser Gallery, NY.