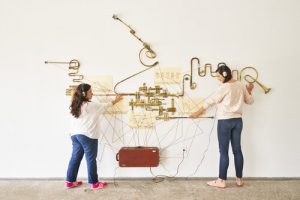 CUE Art Foundation is pleased to present Futurist Listening, Steve Parker’s first solo exhibition in New York City, curated by Marcela Guerrero. This series of work takes the form of sonic headwear, acoustic sculptures built from brass instruments, and graphic scores, all of which build upon World War II audio tactics such as jamming signals, coded messages, and warning sirens, reimagining them in sculptural form as vehicles for present-day protest and deception.

These systems are mapped out across the gallery with trumpet pipes welded into sprawling abstract lines, diagrammed and layered on paper scores, or compiled into looming brass speakers and noise intoners. In the piece ASMR Étude, Parker recreates wearable acoustic locators through which one can hear popular Autonomous Sensory Meridian Response, or ASMR, recordings made to treat anxiety, PTSD, and insomnia. Another piece, titled Ghost Box, requires visitors to activate the sculpture through touch, initiating different looped audio clips of coded songs from the Underground Railroad, coded transmissions like Morse Code, and jamming signals of Soviet Russia and Communist China. Together, these constructions chart a multitude of possible choreographies for each listener to embody their sonic components, implicating the listener’s body as a site for receiving and issuing calls to action. Engaging auditory tools associated with early twentieth century political conflict and war, Parker invites us to listen closely to the ways that sound can be used to incite resistance, disrupt systems of control, and ease anxiety and illness.

Drawing upon the listening philosophies of composers Pauline Oliveros and John Cage, Parker’s work meditates on the possibilities for sound to affect the listener’s body. In her catalogue essay, Lilia Rocio Taboada writes: “Without a key or legend to assist the viewer, the compositions hover between maps, musical scores, and dance notations—all visual tools to spur physical action on the part of a viewer or performer. As with his  sound works, Parker offers a participatory tool, but leaves interpretation open to the viewer’s aural or physical response.” Entangling twentieth century technology and theory with somatic inquiry offers an opportunity to better understand connections between the past and present as we envision the future. In doing so, Parker asks us to consider the ways in which sonic systems historically used for violent ends might be manipulated to serve as both an invitation to collective action and a means for community building and healing.

Marcela Guerrero is Assistant Curator at the Whitney Museum of American Art, New York, where she recently curated the exhibition Pacha, Llaqta, Wasichay: Indigenous Space, Modern Architecture, on view from July 13–September 30, 2018. From 2014 to 2017, she worked as a Curatorial Fellow at the Hammer Museum in Los Angeles, where she was involved in the much-lauded exhibition Radical Women: Latin American Art, 1960-1985, organized as part of the Getty Foundation’s Pacific Standard Time: LA/LA initiative and guest-curated by Cecilia Fajardo-Hill and Andrea Giunta. Prior to joining the Hammer, she worked in the Latin American and Latino art department at the Museum of Fine Arts, Houston, where she was the research coordinator for the International Center for the Arts of the Americas. Guerrero’s writing has appeared in exhibition catalogues and in art journals such as caa.reviews, ArtNexus, Caribbean Intransit, Gulf Coast, Interventions, and Diálogo. Born and raised in Puerto Rico, Guerrero holds a PhD in art history from the University of Wisconsin, Madison.