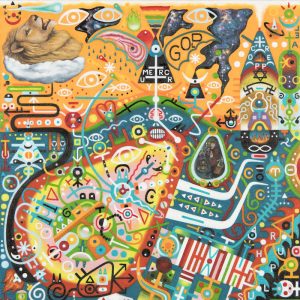 The exhibition includes small-scale oil paintings, videos, and altar-like sculptures produced between 1995 and 2017. “Pareidolia” is a psychological term that refers to the human brain’s tendency to see patterns where none exist—perceiving faces, images, or messages in nature or everyday objects. Thornton’s intricate work references his own hallucinatory visions, the result of an undiagnosed brain tumor in his pineal gland for over a decade. He employs a range of images and symbols that reference 16th-century Dutch painting, mandalas, hieroglyphics, and indigenous and mystical traditions, layering them into interwoven compositions that invite the viewer to approximate his otherworldly medical experience, and serve as a mode of research into that experience.
Shawn Thornton lives and works in Philadelphia, Pennsylvania, and East Madison, Maine. He earned his BFA from Virginia Commonwealth University in 2000, and attended the Skowhegan School of Painting and Sculpture in 2002. Thornton was the recipient of a Pollack-Krasner Foundation grant, and has completed residencies at the Vermont Studio Center and the Ox-Bow School of Art. His work has been included in exhibitions at Fleisher/Ollman Gallery, Stephen Romano Gallery, and the Philadelphia Institute for Advanced Study, among others.
Curated by Tom Burckhardt