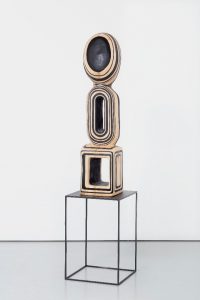 This solo exhibition by Robert Davis, curated by Rashid Johnson, features a series of graphite-on-paper drawings and hand-carved wood sculptures. Collectively, these works form a portrait of the people and artifacts that shaped the world in which the artist grew up, in 1970s Virginia. Johnson notes, “Davis, through both drawing and sculpture, forces the audience to participate in an often-awkward game of ‘name that person, place, or thing’… [his] references allow us an unlimited window into the artist’s thinking around his childhood, politics, and pop culture, as well as an understanding of how he sees time.”

Spurred by conversations with a friend’s five-year-old son, Davis’s project grew out of a Google image search of 70s ephemera. Appropriated from his search results, the subjects of Davis’s graphite drawings are both generic and deeply personal, representative of formative experiences, meticulously re-created in pencil and imbued with nostalgia. Some drawings depict subjects that directly inhabit Davis’s childhood memories, such as the Ford F-150 flatbed truck his grandfather drove. Others, like a portrait of artist Hannah Wilke, represent figures and objects that Davis discovered in adulthood.

While the exhibition’s imagery focuses on the era of Davis’s youth, his project is less a recreation of
childhood than an exploration of the early influences that helped to shape his adult aesthetic sensibility. For Davis, each work “acts as a kind of reliquary for an intense memory that profoundly influenced [his] understanding and aesthetics.” Davis’s sculptures, in particular, capture the aesthetics of the era; totem-like with rounded, anthropomorphic features, the wood forms echo 1970s design, with graphite patterns borrowed from 70s wallpaper.

Robert Davis was born in 1970 in Norfolk, Virginia. He graduated from The School of The Art Institute of Chicago in 1997 with a degree in painting. His work has been exhibited both internationally and in the U.S. It has been included in exhibitions at the Kunstmuseum Kloster Unser Lieben Frauen, Magdeburg; Museum of Contemporary Art Chicago; The Andy Warhol Museum, Pittsburgh; Museum of Contemporary Art, North Miami; Sommer Contemporary Art, Tel Aviv; Luce Gallery, Turin; Rental Gallery, Long Island; and Untitled Gallery, New York. Davis currently lives and works in Brooklyn, New York.