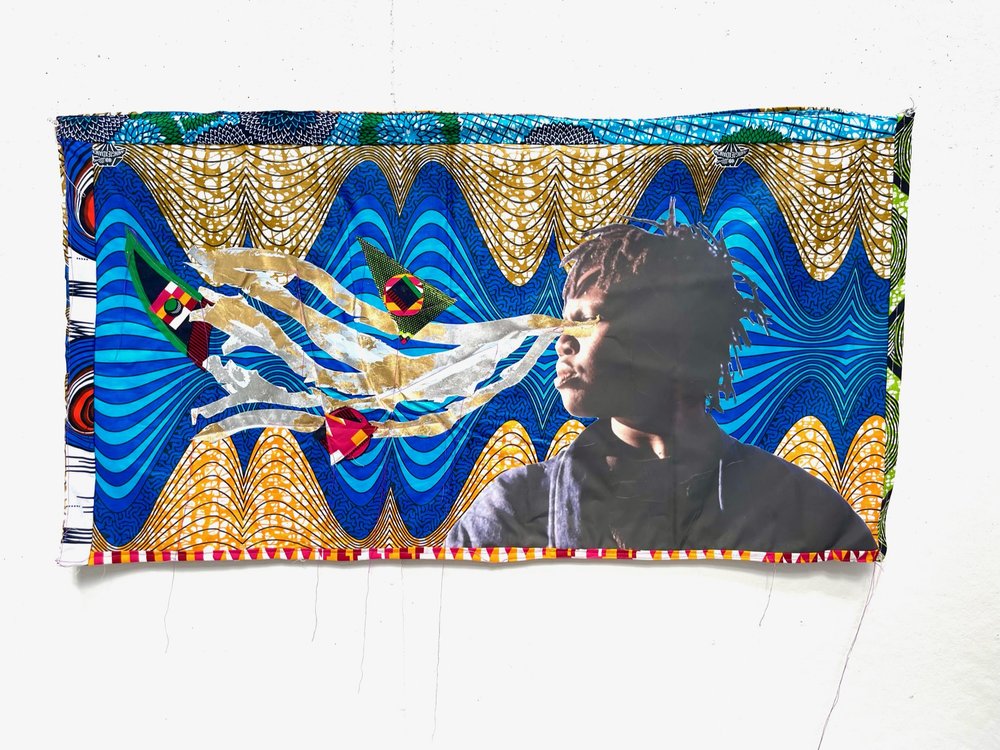 “It is right that a woman should lead. A womb is what god made in the beginning. And in the womb was born Time and all that fills up space. So says the beautiful spirit.” –Mother Seal via Zora Neale Hurston

Remnants of an Advanced Technology is a solo exhibition by artist Alisha B Wormsley with curatorial mentorship from Joeonna Belladoro-Samuels. The exhibition is rooted in the artist’s ongoing project, Children of NAN, a physical and theoretical archive that documents the ways in which Black womxn care for themselves, each other, and the earth. Remnants of an Advanced Technology draws from this archive to present three bodies of work: photo-based quilts, tapestries, and vessels. To the artist, these objects become maps, circuits, and the womb. Collectively, they begin to formulate a creation story imbued with notions of sovereignty, one that is grounded simultaneously in ancient and futuristic practices.

“There are not enough words, spaces, and worlds dedicated to the richness of Black women,” begins exhibition catalogue essayist Amanda Dibando Awanjo. For the past two decades, Wormsley has positioned herself as an archivist of this matter. The objects, photos, video, films, sounds, philosophies, myths, rituals, and performances she has accumulated as part of Children of NAN serve as a growing survival guide, a tool that lives between legacy and prophecy. Remnants of an Advanced Technology at CUE—the artist’s first solo exhibition in New York City—is but one story in the world being created by Wormsley: a thriving radical dimension that centers the agency and decolonized dreams of Black womxn.

Advancing “technology” beyond the purview of the privileged and powerful, Wormsley imagines another realm—one in which care, healing, sacredness, and science converge through Black matriarchal presence. With the works in the exhibition, she creates portals through time, space, and spirit, transforming each object “into a shrine of itself, and then build[ing] around it until its singularity gives way to a constellation,” remarks exhibition mentor Joeonna Belladoro-Samuels. “In beholding her works and her materials, I can’t help but find home. They are charged with memory, and offer me the aspiration of becoming part of the world being constructed by her hand.”

About the Artist
Alisha B Wormsley is an interdisciplinary artist and cultural producer based in Pittsburgh, PA. Her work contributes to the imagining of the future of arts, science, and technology through the lens of Black womxn, challenging contemporary views of modern American life through whichever medium she feels is the best form of expression. This includes actions such as creating an object, a sculpture, a billboard, a performance, or a film. Wormsley thrives in collaboration.

Over the last few years, Wormsley has designed public art initiatives including Streaming Space, a 24-foot pyramid with video and sound installed in downtown Pittsburgh, as well as several park designs and a newly commissioned public artwork at the Pittsburgh International Airport. Wormsley’s ongoing public program, There Are Black People In the Future, gives mini-grants to open up discourse around displacement and gentrification. In 2020, she launched Sibyls Shrine, an arts residency for Black creative mothers that has received support from the Heinz Endowments. In 2022, she was awarded a Guggenheim Fellowship with longtime collaborator Li Harris to engage in site-specific fieldwork in international and national topographical locations, with the goal of making a film that establishes a series of portals to an inner space reality for Black exponential potential of Being. Wormsley was recently selected with collaborator Kite for Creative Time’s 2023 commissioned open call. Integrating media, public space, and public interaction, they will design invitations for rest and reimagination rooted in practices of Afro-Futurism and Indigenous Protocol.

Wormsley’s work has been exhibited widely, most recently at the Oakland Museum, VCUArts Qatar, Speed Museum, Artpace, Times Square Arts, Mattress Factory Contemporary Museum, and the Carnegie Museum of Art. She has received fellowships from Monument Lab and the Goethe Institute, as well as the Sundance Interdisciplinary Grant and the Carol Brown Achievement Award, among others. Wormsley holds an MFA in Film and Video from Bard College, and is currently a Presidential Postdoctoral Research Fellow at Carnegie Mellon University.

About the Mentor
Joeonna Bellorado-Samuels is a Director at Jack Shainman Gallery, and views her position as an advocacy role in helping to manage the careers of artists within the gallery’s roster. She is also the founder of We Buy Gold, a roving gallery that presents exhibitions, commissioned projects, and public events. She was on the curatorial team of The Racial Imaginary Institute, and was a founding Director of For Freedoms, the first artist-run Super PAC, which uses art to inspire deeper political engagement in order to impact policy and reshape the American political landscape.