Cue Art Foundation: Peter Williams: “With So Little To Be Sure Of” 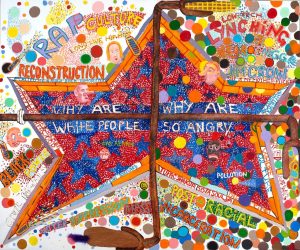 This solo exhibition by Peter Williams features a series of oil paintings, drawings, and a mixed-media installation that confronts viewers with the traumatic reality of systemic violence towards African Americans. its curator, Larry Ossei-Mensah, writes, “Commenting on the concepts of race, representation, white supremacy, oppressive social structures, humanity and grace, the works…proselytize their audience with narratives of social surrealism.”

In With So Little To Be Sure Of, Williams draws on four decades as a painter and storyteller to bear witness to systems of oppression in our society, both historical and current. With a vivid palette and comic-style rendering, the artist paints a frenetic narrative that is at once enticing and grotesque. Victimizers take the form of fanged and leering blue-eyed policemen-pigs who torture and abuse black bodies. Williams interweaves references to true incidences of violence with allegorical scenes in which black resistors taunt and tame their abusers.

At a moment he views as a precipice for social and political change, Williams hopes his work will serve as a call to action. “[W]e must do more than bear witness,” he writes, “We must respond.”

Peter Williams grew up in Nyack, NY, a small town on the Hudson River. He holds a B.F.A. from the Minneapolis College of Art and Design and an M.F.A. from the Maryland Institute College of Art. He lived in Detroit for seventeen years, where he taught at Wayne State University. Williams has received numerous grants and awards, including a Ford fellowship, a McKnight Foundation fellowship, and grants from the Joan Mitchell Foundation and the Michigan Council for the Arts. His work is included in the collections of the Detroit Institute of Arts, the Walker Art Center in Minneapolis, and the Whitney Museum of American Art. Williams currently lives and works in Delaware.