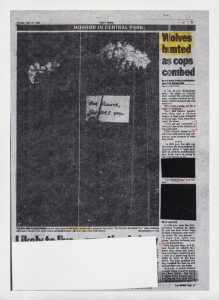 This group exhibition is presenting the work of six artists who are invested in the relationship between language and violence. The work maps a range of responses to the paradoxical fact that while it is urgent and necessary to use language in protest, language is also routinely the very site of structural violence.

ARE YOU THE GOODS? (‘Les Biennes’) is a paper bag installation by Wilder Alison. The mural-scale work is comprised of approximately thirty silkscreened paper bags hung open on the back wall of the gallery, which is also painted with a color field background. The text is the narrative of a dream Wilder once had, which encompassed a word-play between French and English: les biens translate to the goods, while lesbians means the same thing in both languages.

The Central Park Five are five men of color wrongly convicted of assaulting and raping Trisha Meili, a white female jogger in Manhattan’s Central Park, on the 19th of April, 1989. Alexandra Bell’s installation presents several weeks of reporting by the Daily News on the young men’s arrest, annotated and edited to reveal the racist violence perpetrated by the newspaper’s use of language.

Al Freeman’s vinyl soft sculpture rendition of the Greek alphabet and accompanying drawings on paper consider the alphabet a subject, rather than simply a vehicle for semantic sense. In an American context, the Greek alphabet is widely used by university sororities and fraternities, which has shifted its aesthetic association to a certain kind of youth culture and its rituals of initiation.

The images projected onto both sides of a free-standing blackboard show the artist, Ariel Jackson, drawing a diagram as though she were lecturing a class. Drawing both from Judith Carney’s work on the transmission of African farming techniques during slavery and from her own grandfather’s mechanical library, Jackson renders the history of knowledge lost, recovered, and transformed through several generations of African Americans in the South.

The Jehovah’s Witnesses are known for the attention they pay to diversity in their promotional materials, which are full of pictures of people of color glowing with the light of inner salvation. Shellyne Rodriguez cuts these figures out and re-contextualizes them on paper bag backgrounds, collaged with speech bubbles cut from lottery ticket paper. Each kind of paper used in the work represents an aspirational discourse in the Bronx, a site deeply marked by structural violence.

The body as the agent of language appears in neither Leah Weinberg-Moskowitz‘s video installation nor in the accompanying photographs. The video plays inside a headset, isolating the viewer’s visual experience from the rest of gallery without physically separating the work from the common space of the exhibition.  It depicts a hovering point of light which the camera frame drifts about elliptically to spell the letters “S – U – I – C – I – D – E – N – O – T – E.”

Original Language is organized by Natasha Marie Llorens, an independent curator and writer based in Marseille and New York. Her curatorial research is focused primarily on the relationship between violence and representation in contemporary art from a feminist perspective. She has curated exhibitions at the International Studio and Curatorial Program (Brooklyn), REVERSE Gallery (Brooklyn), the Project Space at the Elizabeth Foundation for the Arts (NYC), Ramapo College (New Jersey), the Zabludowicz Gallery (London), Momenta Art (Brooklyn), the Aronson Gallery at Parsons Design School (NYC), the Essex Street Market and Cuchifritos Gallery (NYC), Skowhegan’s space in Manhattan (NYC), and Hercules Art Studio Program (NYC). She has held curatorial residencies at Marra Tein in Beirut, Triangle Arts Association in New York, Rond Point Projects in Marseille, Tabakalera in San Sebastian, and PRAKSIS in Oslo. She has taught at Columbia University, the Cooper Union and Eugene Lang College, all in New York City, and in the Curatorial Studies MA program at Parsons in Paris. A graduate of the MA program at the Center for Curatorial Studies at Bard, she is currently a PhD candidate in Modern and Contemporary Art History at Columbia University. Her academic research is focused on the representation of war in Algerian national cinema between 1965 and 1979.

This exhibition is the winning selection from the 2017-18 Open Call for Curatorial Projects. The proposal was unanimously selected by a jury comprised of panelists Larry Ossei-Mensah, independent curator and cultural critic; Kate Shepherd, artist; and Shannon Stratton, Chief Curator at the Museum of Arts and Design. In line with CUE’s commitment to providing substantive professional development opportunities, panelists also serve as mentors to the exhibiting artists, providing support throughout the process of developing the exhibition. We are honored to work with Shannon Stratton as the Mentor of this exhibition.