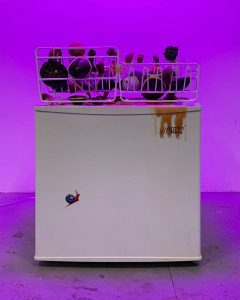 CUE Art Foundation is pleased to present Making A Stationary Rain On The North Pacific Ocean, a solo exhibition by Mo Kong, curated by Steffani Jemison. Blurring fact and fiction, art and science, truth and near-truth, the artist turns the gallery into an immersive installation exploring a not-so-distant future in which China and the United States are in the midst of a political Cold War, echoed externally by an atmospheric antagonism rendered by climate change that has turned China and the U.S. into the hot and cold centers of the world.

Kong’s visual exploration of his own scientific and journalistic research uses climate change as a lens into contemporary geopolitics, neo-nationalism, human migration, human rights, and censorship, among other topics. Central to and grounding the exhibition, Kong has carefully gridded out the gallery with blue painter’s tape, delineating the latitudes and longitudes of the worlds within the installation. The grid marks coordinates, not countries; this is a type of mark-making that allows us to locate ourselves beyond national and temporal boundaries, but also allows our movement and migration to be tracked in turn via GPS. Placed throughout the gridded gallery, a rectangular glass vitrine sits on the floor filled with foam, salt, coal, and other materials, recalling the contents of the North Pacific Ocean; tubes of honey line the walls, referencing the practice of honey smuggling, trade wars, and human migration; sandbags and preserved fruit skins enclosed in a bent lead frame recall evaporated lakes; vertical poles representing weather stations symbolically observe and measure fictional climates; scent diffusers pipe in natural oils associated with either country; and audio tracks of weather forecasts recorded in both English and Chinese play in the background, bemoaning the fall of endless rains.

Referencing Kong’s own experience as a recent Chinese immigrant to the United States, his past occupation as an investigative reporter, and the necessity of the self-censorship he learned to employ as an information strategy while making political art in China, the artist cloaks facts in fantasy in order to explore complex systems of thought surrounding environmental crises and sociopolitical issues. In her exhibition catalogue essay, Danni Shen writes that “Self-censoring has led to the artist’s process of filtering information–clues and hidden evidence–in such a way that viewers are able to draw connections between disparate points of reference. Under the camouflage of scientific research, the work’s political subject comes in and out of focus.” In Kong’s world, knowledge is not linear, information is not neutral, and truth does not require fact. But in order to evade or bypass a system or grid, one must learn to navigate it; and in order to arrive at or depart from a place, one must first learn where it ends and begins. The answers are not always as obvious as they appear.

Mo Kong is a multidisciplinary artist and researcher born and raised in Shanxi, China, and currently residing in Brooklyn, NY. He received his MFA from the Rhode Island School of Design. He has had solo exhibitions at Artericambi Gallery, Verona and Chashama, NY, and his work has been included in exhibitions at the Queens Museum, NY, and the RISD Museum, RI. He has participated in fellowships and residencies at the Triangle Arts Association, the Skowhegan School of Painting and Sculpture, MASS MoCA Studio Residency, the Vermont Studio Center, Gibney Performance Center, and Chashama. His work was featured in the book Brand New Art from China by Barbara Pollack and has been reviewed by Hyperallergic, the Wall Street International, The Round, and more.