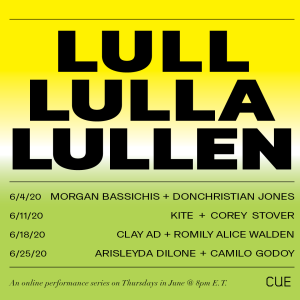 Lull, lulla, lullen is a weekly installment of collaborative performances that draw upon the lullaby—songs that have served to soothe and express worry, while also passing down cultural knowledge. One of the ways moments of isolation, uncertainty, and mourning can affect our collective imagination is in the form of vivid dreams and restless sleep. In response, the lullaby acts as a prompt for caring for one another while sharing narratives of resistance, resilience, loss, and hope.

Taking place online every Thursday in June, this series of evening performances invites artists to address current states of un-rest. Each week we have invited one artist to participate and, in turn, asked them to invite a second artist to collaborate with them. The resulting works take the form of songs of protest and dreams for the future, explorations of traditional Lakota lullabies, guided meditations, telenovelas, and sing-alongs.

Recordings of these events will be available on CUE’s website for a minimum of one week following each performance.

Details and links for each event will be announced shortly.