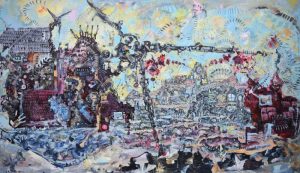 This solo exhibition by James Yakimicki, curated by Gregory Amenoff, of 8 large-scale oil paintings and several drawings presents both a natural and drone-like vision of the world, mediated through nature, civilization, and technological apparatuses.

Yakimicki’s compositions are intricate networks of information, layered and maze-like. Soft palettes belie an underlying anxiety and a claustrophobic solidity of composition. Humans and machines are woven together in a stitched accumulation of marks, creating worlds both welcoming and foreboding. Without concern for traditional scale or perspective, Yakimicki portrays landscapes packed so densely they seem to be on the brink of collapse. Time is unfolding simultaneously throughout these compositions – either as a narrative unrooted in the clock, or as if watching the same moment in time happening to multitudes of people, as on a crowded city block.

The onslaught of information in Yakimicki’s work reflects the pace of the information age, in which untold amounts of data are constantly available through the slightest of gestures. As we ricochet from Google search to text thread to social media apps, we build layers of seemingly unrelated information, leaving traces of the search on our machines and in our consciousness. Yakimicki’s work is almost like a décollage of someone’s search history, peeling away at the complex and subconscious layers of a very specific history and memory, seeking to expose the untold order and an unseen hand controlling these pictorial visions. As Amanda York writes, “Yakimicki finds uncertainty to be an apt description of our current environment. His works are personal, yet universal, as open-ended and purposefully unresolved as life itself, becoming psychological portraits of the physical, imagined, and technological landscapes that we inhabit daily.”

James Yakimicki was born in Beech Grove, Indiana in 1980. Merging his scattered passions for the liberal arts with the continuum of oil painting, Yakimicki earned a BFA from the University of Colorado at Boulder (2007) and an MFA from Columbia University in the City of New York (2012), where he was awarded the Andrew Fisher and Leroy Neiman Fellowships. Upon completion of his graduate studies, James was selected by Professor Rirkrit Tiravanija to participate in Tropical Lab 6: LAND in Singapore, an international artist laboratory and exhibition exploring current issues impacting land, such as agricultural displacement and reclamation. In 2014 he was invited to participate in the apexart Outbound Fellowship program to Thailand by Sanford Biggers. He currently maintains studios in Colorado, Indiana, and New York City.

Gregory Amenoff is a painter who lives in New York City and Ulster County, New York. He is the recipient of numerous awards from organizations including the National Endowment for the Arts, New York State Council Foundation, and a Guggenheim Fellowship in 2011. He has had over fifty one-person exhibitions in museums and galleries throughout the United States and Europe. His work is in the permanent collections of more than thirty museums, including the Whitney Museum of America Art, MoMA, and the Met. He served as President of the National Academy of Design from 2001-2005. He is a founding board member of the CUE Art Foundation and served as the CUE Art Foundation’s Curator Governor from 2002 to 2015. Amenoff has taught at Columbia for more than twenty years, where he holds the Eve and Herman Gelman Chair of Visual Arts and was Chair of the Visual Arts Division from 2007-2013.