Cue Art Foundation: Cal Siegel “I am the box no roof can cover” 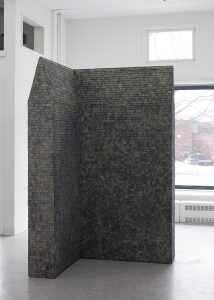 Central in this solo exhibition by Cal Siegel, curated by Sable Elyse Smith, is a large-scale house-like structure, lacking in windows and doors and sheathed in an exterior of dollhouse shingles, impenetrable by bodies or by light. Shown along with several paintings, photographs, and drawings, this body of work employs visual cues from vernacular colonial architecture to explore the violence and exclusion of American history.

House shingles are a recurring theme in Siegel’s work, used to cover large architectural forms of his own creation (untitled, 2018) as well as pre-existing colonial structures in photographic interventions such as Witch house drive by (2017). As Sable Elyse Smith puts it, “the shingle is as much a drawing tool as it is a skin.” It is both a playful and foreboding material, belittling or taunting the intended force and weight of the architecture and history it references. The United States was and in many ways still is a colonialist playground, and these artworks acknowledge this bitter fact while also calling to mind an image of America’s founders playing with dollhouses; a would-be humorous image if not for the fact that these men treated so many bodies as objects, trapping them in structures of power and oppression that, like Siegel’s work, had no doors or windows in sight.

I am the box no roof can cover confronts a dark and violent colonial history too frequently washed over with nostalgia, reverence, and willful ignorance. The violence and power of structures both physically erected in space as well as on and over bodies are unmistakably intertwined. As Siegel suggests, such forms “cannot be alienated from the people who built them or against whom they were built, nor can they be removed from their contextual landscapes.” His work confronts the scale and scope of violence in the colonial legacy of the United States, questioning how property and architecture function through questions about who made these structures, for whom, and at what ongoing cost?

The exhibition will close with the launch of …In That Empire, an artist book by Cal Siegel and Sable Elyse Smith.

Cal Siegel was born in West Newbury, Massachusetts and currently lives and works in Brooklyn, New York. He received his B.A. in Studio Art and Media Studies from Pitzer College in Claremont, California. In 2015 he attended Skowhegan School of Painting and Sculpture in Maine. Solo and two-person exhibitions include The house your road ends on, Outside Gallery, North Adams, MA (2018); S.L.A.B., Violet’s Café, Brooklyn, NY (2015); wallflower frieze with Meena Hasan, 6Base, Bronx, NY (2017); and Smile in the Dark with Matthew Stone, Left Field Gallery, San Luis Obispo, CA (2016). He has participated in a number of group exhibitions including The Gift Shop, Red Bull Studios, New York (2016); The landscape changes 30 times, Anahita Gallery, Tehran, Iran (2015); Inside/Outside: Works from the Skowhegan Archives, CSA Gallery, Waterville, Maine (2015); and To do as one would, David Zwirner, New York (2014); among others.

Sable Elyse Smith is an interdisciplinary artist, writer, and educator based in New York and Richmond, Virginia. Using video, sculpture, photography, and text, she points to the carceral, the personal, the political, and the quotidian to speak about a violence that is largely unseen and potentially imperceptible. Her work has been featured at the Museum of Modern Art, MoMA PS1, the New Museum, The Studio Museum in Harlem, JTT, Rachel Uffner Gallery, and Recess Assembly, all in New York; Yerba Buena Center for the Arts and Artist Television Access, San Francisco, CA; and Birkbeck Cinema in collaboration with the Serpentine Galleries, London. Her writing has been published in Radical Teacher, Studio Magazine and Affidavit, and she is currently working on her first book. Smith has received awards from Creative Capital, the Fine Arts Work Center, Queens Museum, Skowhegan School of Painting and Sculpture, Rema Hort Mann Foundation, the Franklin Furnace Fund, and Art Matters. She is currently Assistant Professor of Sculpture and Extended Media at the University of Richmond.

The exhibition is accompanied by a 32-page color catalogue, with texts by Cal Siegel, Sable Elyse Smith, and April Freely. The catalogue is available online and free of charge to gallery visitors. For more information please contact Programs Assistant Lilly Hern-Fondation at lilly@cueartfoundation.org.