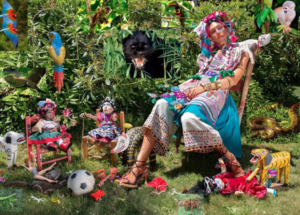 Martine Gutierrez is a Brooklyn-based visual and performance artist, musician, and producer who draws from eclectic media to explore notions of beauty, identity, and the impact of pop culture.

Gutierrez identifies as Latinx, Indigenous, and Transgender, and all three of these identifiers significantly impact her relationship with pop culture’s ideas of beauty and help inform her work.

The image to the left depicts the work Queer Rage, Imagine Life-Size, and I’m Tyra, p66-67 from Indigenous Woman. Taking the form of a fashion shoot, Gutierrez photographed herself seated against a lush, green backdrop. When the image first appeared in a fashion magazine of her own design, Gutierrez listed the designers of all the clothing she was wearing, including brands like Versace, Vivienne Westwood, and Prada alongside Goodwill.

Queer Rage, Imagine Life-Size, and I’m Tyra, p66-67 from Indigenous Woman looks at how mainstream brands appropriate Indigenous cultures and thrust them into a clunky mishmash without regard for tradition or context. Here, much of Gutierrez’s outfit is composed of items from major fashion labels that borrow from Indigenous traditions. Fittingly, as Gutierrez composes the rest of her image, she incorporates crudely photoshopped exotic animals, underscoring the artificial nature of the scene.