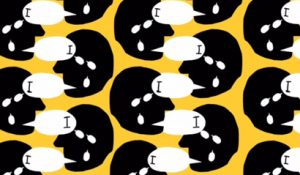 Emma Hart, winner of the sixth edition of the Max Mara Art Prize for Women, presents her new large artwork Mamma Mia! at Collezione Maramotti, where it will enter its permanent collection, after being shown at Whitechapel Gallery, London (12 July – 3 September 2017). The artist’s installation at the Collection shows some interesting variations compared to the London’s exhibition, based on the specific features of the site.

The installation consists of a family of large ceramic heads, suggesting a dialogue with one other. Each sculpture is jug-like in shape: the spout mimics a nose and the opening a mouth. Produced by the artist in Faenza alongside ceramic artisans, each sculpture is glazed incorporating motifs, such as the speech bubble. The interior space of the heads is filled with vivid patterns, designed and hand-painted by Hart after researching the designs and practice of the Italian tradition of maiolica.
Mamma Mia! also represents the culmination of an investigation into pattern: visual patterns, and patterns of psychological behaviour, how to design then rupture these and the ruminations in between. The space between viewer and object is key, as ever in Hart’s work, and is charged with the artist’s particularly personal take on her experiences in Italy: the heat, light and colour, language and family dynamics in an unfamiliar setting.

The exhibition is the result of a six month bespoke residency which started in June 2016 and was divided between three Italian cities: Milan, Todi and Faenza, with a Roman stop-over.
Throughout the residency, which was tailored to her practice and interests, Hart had access to lessons about the Milan Systems Approach, a systemic and constructivist method of family therapy at the Scuola Mara Selvini Palazzoli which involves physical re-enactments and the study of repeated actions. In Rome, Hart visited funerary monuments with Katherine Huemoeller, a researcher from Princeton University whose recent investigations has led Huemoeller to focus on gaining an understanding of family relationships and structures in ancient Rome. In Todi, Umbria, Hart discovered maiolica, traditional Italian tin-glazed pottery which provoked her to create the patterns in her work before ending her residency in Faenza where she began consolidating her research and experimenting with new ceramic techniques.

The exhibition is accompanied by a fully illustrated publication, with several guest contributions.

Mamma Mia! will be also on show at Fruitmarket Gallery, Edinburgh in fall 2018.

Emma Hart makes work that captures the confusion, stress and nausea of everyday experience. Always in pursuit of real life, real feelings, Hart uses ceramics to create claustrophobic installations that engage the viewer physically and emotionally, or in the form of smaller works which come for the viewer. There are frequent verbal and visual spillages, and Hart’s use of clay is often corporeal, forming approximate body parts that act as substitutes for human action and employment.