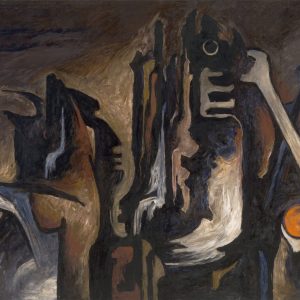 Still: Elemental explores Still’s work in relation to the perennial elements of Greek philosophy: earth, water, air, fire, and æther. Similar to the mystifying power of natural phenomena, Clyfford Still’s often large-scale, colorful abstract work is intended to be transcendent, experiential, and to impact viewers on an intrinsic, emotional level.

Deeply rooted in human experience, the elements have been a central theme in philosophy, science, and art for more than two thousand years in both Western and Eastern cultures, and continue to inspire countless creative thinkers today. Literary critic Northrop Frye states, “earth, air, water and fire are still the four elements of imaginative experience, and always will be.”

In the Middle Ages, they were connected to the four humors of the human body, which later inspired figures like William Shakespeare and Albrecht Dürer. They have been interpreted by William Blake in several of his most notable 18th-century works, which Clyfford Still acquired for his own personal library. Work of other master artists and intellectuals, such as J.M.W. Turner and Dante Alighieri, has also been interpreted in relation to the elements and their inherent dualities. Given Still’s lifelong study of the classics and influencers like Plato, Blake, and Turner, his exploration of natural forces in relation to humanity, and his aspiration to express timeless, universal truths, the elements provide a befitting lens through which his work can be experienced.