Cliffort Still: the Works on Paper 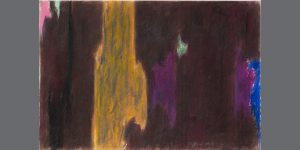 The first exhibition to reveal the spectrum of graphic art created by abstract expressionist pioneer Clyfford Still has been captured and expanded in the first digital publication created by the Clyfford Still Museum (CSM) and its Research Center. Clifford Still: the Works on Paper  is now available, featuring high-resolution images of all 256 objects included in the eponymous exhibition, a new essay by Still scholar Patricia Failing, and more. The publication’s static site vehicle is designed to resist technical obsolescence and will be supported by a PDF download function. It is free to view worldwide and will be free to download.

Every wall of The Works on Paper, installed throughout the Clyfford Still Museum’s renowned Lanny and Sharon Martin Galleries, is represented in the catalogue. Visual content is organized by gallery and featured in a “zoomable” user interface that clearly reveals the evidence of Still’s hand. Failing’s exacting essay matches the scale of this exhibition—the largest ever produced by the Museum—with a trove of new scholarship and biographical details, sourced from the Clyfford Still Museum Archives, that illuminate such topics as Still’s mastery of academic motifs and the influence of English artist, critic, and patron John Ruskin on his ideas and career.

Clyfford Still: The Works on Paper (October 14, 2016–January 15, 2017) reveals the centrality of drawing within Still’s life-long creative process and, more broadly, offers a unique opportunity for the public to view a vital, missing element in the popular understanding of abstract expressionism. Despite the fact that Clyfford Still drew prolifically throughout his career, historically it has been next to impossible to view Still’s works on paper. Only seven are known to exist in public collections outside Denver. Organized by CSM curators David Anfam, Bailey Harberg Placzek, and Dean Sobel, the exhibition is generously underwritten by US Bank. Additional support is provided by the National Endowment for the Arts.

The sheer volume (more than 2,300) and variety of Still’s works on paper attest to the significant role draftsmanship played in his art, particularly when compared to his abstract expressionist contemporaries. Still explored graphite, charcoal, pastel, crayon, pen and ink, oil paint, gouache, and tempera, as well as lithography, etching, woodcut, and silkscreen. The artist felt a strong, private connection to his works on paper. In a 1978 letter to the art collector and gallerist Sidney Janis, Still described his pastels as “a visual diary of a personal world.”