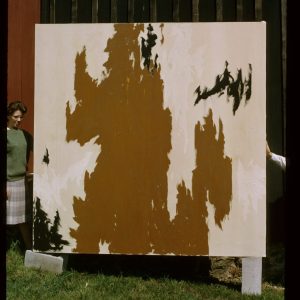 Curated by the younger of Clyfford Still’s two daughters, Sandra Still Campbell, A Daughter’s Eye/A Daughter’s Voice presents a highly personal and original vision of Still’s art and ideas. Two-thirds of the featured works have never been exhibited, and many have been unrolled and stretched for the first time since Still painted them. Campbell’s reflections about her father, his art, and their life together accompany the paintings, and are presented both in wall texts and a podcast. Her audio commentary unfolds in four chapters, one for each of the exhibition’s galleries.

Born in 1942, Campbell became increasingly active in Still’s career beginning in the early 1960s, when the Still family began their inventory process and documentation of Still’s life’s work. Campbell lived in the Still household on and off between 1962 and 1971. Such deep immersion in Still’s ideas and practices allows Campbell to make uncanny connections between seemingly unrelated works, such as a 1949 canvas created in San Francisco, PH-385, and a 1973 painting created in Maryland, PH-1034.

Most of the paintings Campbell selected for the exhibition exemplify his concept of recapitulation, a term used in musical theory to describe repetition with slight modifications. Campbell recalls her father using the word often to express his desire to recontextualize and refine compositions by repeating, juxtaposing, and transforming familiar forms, lines, and colors. Campbell also chose many works that illustrate his consistent exploration of the color ochre to capture the organic essence of all human and earthly things.

“My father fought against making his work inhuman—sterile, cold, lacking in humanity,” Campbell says. “He was all about the fire of the human spirit.”

“The best moments were when he would exit the studio for lunch or to announce to us, ‘I’ve got it. Yes. Come see.’ You can imagine the delighted and awed reactions when first faced with a new work. Speechless mostly. One had to catch one’s breath. There were times when I could not react; I had to grow into some paintings over time. This was a privilege and I knew it.”