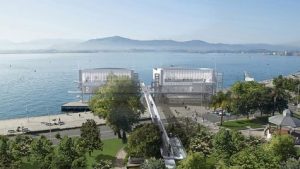 The newly opened Centro Botín presents the first large-scale monographic exhibition of Carsten Höller (Brussels, 1961) to ever take place in Spain. The exhibition offers a perspective on the last decade of this internationally acclaimed Belgian artist’s work known for his continued investigation of the spectator’s experience, and how s/he completes the work by engaging with it.

Carsten Höller was trained as a scientist and holds a doctorate in agricultural science, specializing in the area of insects’ olfactory communication strategies. In the first stages of his artistic career – until 1994 – he continued to work as a research entomologist. A key protagonist of a generation of artists whose research is grounded in what is sometimes referred to as “relational aesthetics”, Höller elaborates his work as interfaces to trigger an experience: while their sculptural quality is undeniable, it is the way the visitors engage with his objects that finishes the work. Höller has investigated among others things the effect of light waves, absorption of chemicals on his brain activity, and the consequences of his public´s perception of the world that surrounds them.

Lightness and Boldness. Goya’s Drawings presented by Centro Botín is the most important exhibition devoted to Goya’s drawings in Spain. Considered to be the “visual diary of Goya himself”, the drawings by the artist from Zaragoza show his inner universe and express his peculiar vision of the world, in the form of a visual diary.

This exhibition is the result of an ambitious research and cataloguing project based on the drawings of Francisco de Goya, thanks to the collaboration agreement entered into by the Fundación Botín and  Prado Museum in 2014.