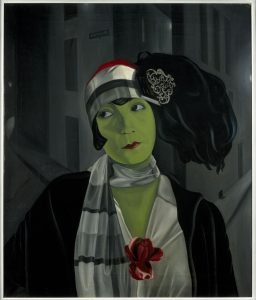 The Utrecht painter Pyke (Pieter Frans Christiaan) Koch (1901-1991) is among the leading representatives of magic realism in the Netherlands.

Koch’s paintings of formidable women captured the public’s imagination: with Mercedes of Barcelona (1930), Bertha of Antwerp (1931) and The shooting gallery (1931), Koch gained a reputation as an artist who used his highly perfected technique to create an idiosyncratic fantasy world, both ominous and bitingly ironic. His Nocturne (1930) even caused a scandal: the small temple at night, surrounded by dimly lit façades on a city square, is, after all, a public urinal – and a notorious meeting spot for homosexuals.

In this exhibition, Koch’s work is displayed in the context of his contemporaries – not just of Dutch artists like Carel Willink, Raoul Hynckes and Charley Toorop, but also of Georg Grosz, Anton Räderscheidt and Christian Schad, as representatives of the German Neue Sachlichkeit (New Sobriety movement). In addition, short documentaries compiled by Ad van Liempt capture the mood of those years.

In this way, the exhibition seeks a deeper understanding of Koch’s artistic career and inspiration while exploring the political complexities of the Interbellum: the period in between the two world wars. It also aims to put Koch’s affiliation with fascism into perspective and thereby to add some nuance to the debate on ‘right’ and ‘wrong’ that has continued unabated since 1945. Now that rightist populism is on the rise all across Europe and an anti-democratic voice is becoming more strident, this re-examination of the Interbellum is highly relevant.

After the Second World War, Koch was condemned for his fascist sympathies and was banned from exhibiting his work for one year. But his friends and colleagues remained faithful to him. In 1950 he and a number of colleagues represented the Netherlands at the 25th Venice Biennale. And in 1955 he was offered a solo exhibition in Amsterdam’s Stedelijk Museum by its director and renowned member of the resistance, Willem Sandberg. By that time he was exploring new avenues in his work, painting a series of portraits and scenes with strong references to Piero della Francesca, one of the great masters of early Italian Renaissance work. He also revived his fondness for the so-called ‘naive’ art of Henri Rousseau. His Sleeping gypsy (1897) inspired Koch’s Resting somnambulist, of which he painted four versions between 1959 and 1971.

Koch continued to work as an artist until 1980. His last painting, The tightrope walker III (1980), can be interpreted as a metaphorical self-portrait in which Koch takes stock of his life and work. In a bare and shabby room with two doors leading to stairs going up and going down, a man balances on a rope, his head covered by a cloth. It is a desolate scene, and a poignant finale to an impressive oeuvre.