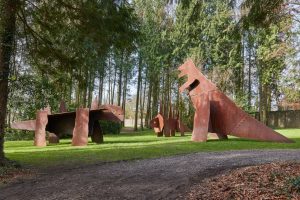 Jake & Dinos Chapman, The Meek Shall Inherit the Earth, but not the Mineral Rights, 2007

Grounds: The Meek Shall Inherit the Earth, but not the Mineral Rights comprises three large-scale sculptures entitled The Good, The Bad and The Ugly. Towering as high as 8 metres, these impressive corten steel works will be placed amongst the beautiful woodlands at CASS. The title is said to have been taken from a quote by the oil and art tycoon J. Paul Getty and alludes to the darkness behind these child-like sculptures. Resembling a make-your-own set for children, these clumsily lovable herbivores invite audiences to view the work with a sadistic humour typical of the Chapman Brothers.

Main Gallery: When Hell, a seminal Chapman Brothers work, was destroyed in the fire that engulfed the Charles Saatchi collection in 2004, and with it the cream of the YBA’s output, the artists responded by creating Two Legs Bad, Four Legs Good. In direct contrast to the sophisticated fabrication of Hell, and perhaps as a retort to the destruction of valuable work, these 31 miniature sculptures are constructed out of poster paint and papier-mâché.

Jake & Dinos Chapman are known for iconoclastic sculpture, prints and installations that explore the political implications of religion and morality with sardonic humour; often using the distance of history to illustrate the monstrous effects they can have on society. The brothers graduated from the Royal College of Art, London in 1990 and have collaborated ever since. They achieved notoriety in the mid-1990s when their sculptures were included in the Young British Artists showcase exhibitions Brilliant! and Sensation. In 2003, they were nominated for the Turner Prize.