Casa Morra: Cesare Pietroiusti “School of drawing and painting in the absence of talent” 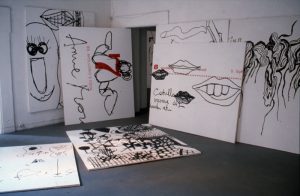 The School of drawing and painting in the absence of talent, in collaboration with the Academy of Fine Arts in Naples, consists of a project that retrospectively retraces elements of Pietroiusti’s artistic research, and will be composed of two distinct yet related moments: a performance-workshop and a conclusive exhibition.
The workshop, with the participation of a group of students from the Academy of Fine Arts of Naples, will consist in retracing the techniques that Cesare Pietroiusti used (between 1982 and 1986) to realize his first (and almost only) pictorial works, starting from the preparation of the canvases and leading to the copying of images projected through slides, creating the new works in the most faithful way possible to the originals.
The students will also be able to design and realize one or more series of large quantities of drawings made with heterodox techniques and materials (fire, beer, salt water, etc.), according to methods already used by the artist for “free productions and distributions” of drawings since 2005.
All the works realized will be the object of the final exhibition.

The performing workshop and the exhibition will follow each other temporally on the monumental staircase, and in the adjacent spaces, of the Palazzo Cassano Ayerbo D’Aragona – Casa Morra. The public will be able to appreciate the different phases of work and, in particular:

from 17 to 24 April 2018, from Tuesday to Friday from 12 a.m. to 7 p.m.
Performing workshop School of drawing and painting in the absence of talent
with the students of the Academy of Fine Arts of Naples

from 25 April to 19 May 2018, from Tuesday to Friday from 10 a.m. to 5 p.m.
Final exhibition of the School of drawing and painting in the absence of talent

Casa Morra is thus transformed into a theater of operations similar to a factory: a multifocal situation is put in place, in which the different tasks occur simultaneously in distinct points of the space, underlining the natural performative vocation of the staircase itself.

On the School of drawing and painting in the absence of talent
In addition to the laboratory and performative elements, Cesare Pietroiusti addresses the theme of the retrospective in a lateral way, reflecting on how it might be possible to operate on the history of one’s artistic career without having to exhume one’s works of the past in a conventional or fetishistic way. While facing the taboo of remaking a work of another time, the artist proposes a new interpretation of the concept of contemporaneity that, in a dialectical re-examination with the past, becomes the simultaneous and convergent presence of different times and meanings. The author’s hand tends to disappear, in an operation where one contemplates the non-necessity, for an artist, to possess a talent that can be expressed with a manual and technical skill. On the other hand, this project reflects the same lack of talent of Pietroiusti himself, which, in his time, led him to use a slavish way of copying slide projections onto canvas and paper.

On Cesare Pietroiusti
Born in Rome in 1955, he began his artistic research in 1977, when he started working in Sergio Lombardo’s Jartrakor Study Center, actively participating in the definition of an ‘eventualist’ art. In the second half of the eighties, together with Salvatore Falci, Stefano Fontana, Pino Modica and Domenico Nardone, he gave life to the experience of the Gruppo di Piombino which saw, about a decade before the birth of ‘relational’ art, the involvement, through an aesthetic stirring, of an unconscious public. Since then he has founded and coordinated research centers and residency programs, conferences and experimental laboratories. He has exhibited in private and public spaces, either official or unofficial, in Italy and abroad. In 1997 he published, with the Edizioni Morra, Non-functional Thoughts, a collection of about one hundred apparently absurd ideas, formulated as precise instructions for the realization of artistic projects. In the first decade of the 21st century his work focused on the theme of exchange and on the paradoxes that may lie within the western social system, underlining in particular the peculiarity of the money-commodity economic relationship. Since 2004 he has distributed tens of thousands of autographed drawings for free, sold stories, ingested banknotes at the end of public auctions and then returned them to the rightful owner after their excretion, organized gastronomic evenings where at the end of lunch the public was paid, set up exhibitions where the works were sold in exchange for ideas and not for money. Among others, he exhibited his works at: Art in General, New York (2001); Ikon Gallery, Birmingham (2007); Athens Biennial (2009); MAXXI, Rome (2010); Moscow Museum of Modern Art (2011), Hayward Gallery, London (2012), Sandretto Foundation, Turin (2014), Bozar, Brussels (2014), Maga, Gallarate Museum (2016), Kunstverein Arnsberg (2016), and was co-curator of the exhibition “Sensibile Comune. The living works”, GNAM, Rome (2017). From 2004 to 2015 he was a Visual Arts visiting professor at the IUAV in Venice and, from 2009 to 2016, MFA Faculty at Lesley University, Boston. Two years ago, as a member of the collective “Lu Cafausu”, he gave life to the Lac or Le Mon Foundation (San Cesario di Lecce).