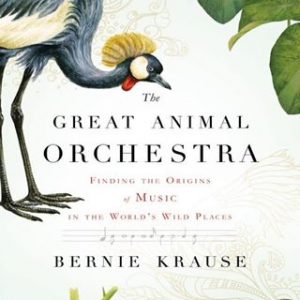 The Great Animal Orchestra is inspired by the work of American musician and bioacoustician, Bernie Krause. The exhibition brings together the work of artists from all over the world and invites the public to enjoy an aesthetic meditation, both aural and visual, on the animal kingdom, which is increasingly under threat in today’s modern world.

For over 40 years, Bernie Krause has collected almost 5,000 hours of sound recordings of natural habitats, both terrestrial and marine, inhabited by almost 15,000 animal species. His research offers a wonderful immersion into the sound universe of animals, otherwise known as biophony. Before developing a passion for animal recordings, far removed from the world of humans, Bernie Krause worked as a musician and acoustician in the 1960s and 1970s, collaborating with artists like The Doorsand Van Morrison. He also contributed to the creation of soundtracks to well-known films like Rosemary’s Baby by Roman Polanski and Apocalypse Nowby Francis Ford Coppola.

Bernie Krause is unique. He contemplates the natural world as a poet, he listens to animal vocalizations as a musician, and through his recordings he studies these from the perspective of a scientist. Bernie Krause has become a master in the art of revealing the beauty, diversity and complexity of the languages of wild animals, increasingly reduced to silence by the din of human activity. He implores us to listen to these voices from the living, non-human world before they are definitively shrouded in silence.

The exhibition presents both an aural and a visual dimension. In the transparent, light-filled spaces of the Fondation Cartier, Mexican architects Mauricio Rocha and Gabriela Carrillohave chosen to direct the great orchestra of our images of the animal world. Exploring the multiple visual perspectives that this “glass house” offers, they have created a scenographyin terracotta brick that surrounds the garden and the interior spaces of the building designed by Jean Nouvel.This architectural arrangement metaphorically reproduces that of a symphonic orchestra.

The exhibition presents a drawing of 18 meters in length specifically created for the exhibition by Chinese artist Cai Guo-Qiang. This work displays wild animals of different species gathered around a watering hole in a moment of peace and extreme vulnerability. Cai Guo-Qiang executed this drawing using gunpowder, a material he uses with an unrivalled expertise and dexterity. On large sheets of paper, an outline was first of all drawn using black gunpowder before being set alight. The traces of burn marks and smoke compose the sought-after motif: a landscape populated by animals.

With the image created by Cai Guo-Qiang, evocative of the cave paintings from prehistoric times, the exhibition associates the striking yet rather strange photographs of Japanese artist Manabu Miyazaki. These are taken using a kind of robotic “camera trap,” and done so with great ingenuity and unparalleled sensitivity.Exhibited for the first time outside of Japan, these images allow the viewer to see wild animals sharing the same environment and pathways as their human counterparts. Manabu Miyazaki’s photographs also reveal the mysterious dreamlike beauty of the night-time flight of birds through the forest. The artist describes his approach in the following words: “My camera traps are like trees observing the animals. The watchful eye of the tree becomes my camera.”