Carmona: Pedro Chorão ‘What does the Painting’ 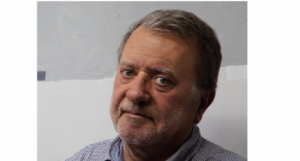 Pedro Chorão was born in Coimbra, Portugal, in 1945.

His first interest was biology and he studies in Liverpool at the North-East Liverpool Technical College from 1963 to 1967. It was there where he was inspired to begin painting by admiring the British pop artists of the moment that hung on the walls of the public library which he daily frequented.
He then moved to Paris and studied history of art and archeology at École du Louvre and École Pratique des Hautes Études (Sorbonne) and at this time he began painting in earnest.
From 1968 to 1972 he completed 4 years of compulsory military service; 2 years in Portugal and 2 years in the Cape Verde Islands. Once back from Africa he concluded his Master’s Degree in Painting at the University of Lisbon (Faculty of Arts).
He then returned to Paris on a scholarship awarded by the Gulbenkian Foundation (Painting) from 1976 to 1978. Afterwards he was awarded a new scholarship by the same foundation to paint in Lisbon from 1987 to 1989.