Who is Carmody Groarke

Carmody Groarke is a London-based architectural practice founded in 2006 by Kevin Carmody and Andy Groarke. The practice has developed a reputation for working internationally on a wide range of arts, cultural, heritage and residential projects.

Recently completed work includes the critically acclaimed Windermere Jetty Museum in the Lake District, and a new gallery for the Science and Industry Museum in Manchester. Current projects include a major refurbishment and extension to the national Design Museum in Ghent (Belgium), an international arts venue and artists studios in Sheffield and a masterplan for the British Library in Yorkshire, with a major new archive building for the national collection.

Three monographs of the practice’s work have been published by the world renowned El Croquis, 2G and AMAG.

“AN ICONIC HOUSE IN SCOTLAND GETS A GORGEOUS REDESIGN”

The Hill House, a sprawling mansion that architect Charles Rennie Mackintosh built, is famous among design lovers as a signpost on the road to modernism 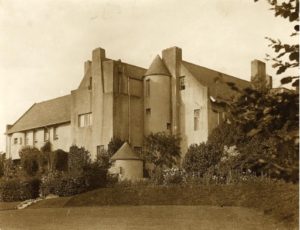 ALL THE ANGLES Traces of the Scottish baronial style and Central European abstraction are visible in the Hill House, designed by Charles Rennie Mackintosh in 1902. A view of the southeast facade, seen here in the 1930s.

The Scottish town of Helensburgh, northwest of Glasgow on the banks of the Clyde, is veiled in clouds and drizzle for much of the year. The chalk-colored villa that architect Charles Rennie Mackintosh built here seems to rise out of the damp like an apparition. The Hill House, with its boxy, asymmetrical facade and wayward chimneys, is famous among design lovers as a signpost on the road to modernism; radical when it was built in 1904, it has since settled into midlife as one of the jewels of the National Trust for Scotland.

Inside, the rooms have a dreaminess conjured by their allover hues of dark chocolate or moonflower white, a reflection of the holistic fervor Mackintosh and his wife, the artist Margaret Macdonald, brought to their decoration. The cloakroom’s dark, gridded cubbies were a favorite of Brad Pitt’s when he stopped by during the filming of World War Z nearby; fashion designer Jonathan Anderson—who drew on the Scottish architect’s decorative motifs for a Loewe capsule collection last fall—admires the pale rooms.

“I have always been kind of obsessed by him,” Anderson says of Mackintosh, “this person creating spaces that were completely out of step with what was happening in the rest of the world. I think what’s inspiring is that you have this elusive figure who built an aesthetic that will probably survive for a very long time—and is still influencing people today.”

Mackintosh designed the Hill House for the family of Walter Blackie, a successful local publisher of fairy tales and other illustrated books. A better pairing of architect and client would be hard to imagine. Blackie was out to make a statement, and Mackintosh, 33 when he took the job, was already getting attention for his commission to expand and update the Glasgow School of Art, his alma mater. 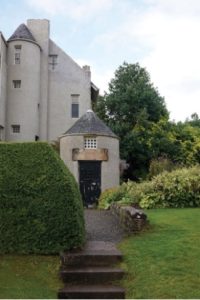 A partial view today, with signs of water damage on the stucco.

That the Hill House would be willfully different from its high-Victorian neighbors was clear from the start. The Blackies’ architect visited with them to see how the family lived before getting down to work. The result was a house designed from the inside out: There were play spaces for the couple’s five children, a vanilla-dipped master bedroom and drawing room (the latter with a heated window settee) and a flower pantry outfitted with a deep sink and three separate taps—for rainwater, heated water and water from a nearby spring. The total bill amounted to £6,652.

To push the sculptural effects of his creation to extremes, Mackintosh used none of the exterior coping stones or corner dressings typical of Scottish vernacular buildings. He frosted the Hill House like a petit four in a material known as harling—the local equivalent of stucco—made not from traditional lime slurry but from a recent English import called Portland cement.

As followers of Louis Kahn, Frank Lloyd Wright and other architectural avant-gardists know, what makes a building modern in construction can prove fatal over time. Lime-based harling breathes; Portland cement doesn’t and is prone to cracking, allowing water in but not out again. When storms swept through Helensburgh, maids employed by the Blackie family grew accustomed to shoving tin pails under offending ceiling drips. A century on, the Hill House has effectively become a sieve, with streams sloshing through the basement on rainy days (there were 187 recorded in 2018). Last year, a wasp’s nest the size of a basketball was discovered inside the drawing room ceiling. 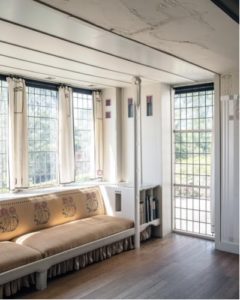 After years of debate over potential solutions—including a far-fetched notion to knock the place down and erect a facsimile—the National Trust, which has owned the house since 1982, has finally taken action. This month, a multiyear conservation effort has its public launch with the debut of The Box, a steel-roofed cage costing $6 million that will allow the Hill House to dry out gradually without enduring the 63-inch average annual rainfall. The Box will lead people through a visitor’s center and along catwalks up, around and over the Hill House to watch the work in progress, turning the architectural repairs into something like a theme park.

“There were lots of differing opinions about what to do at Hill House, philosophically and technically,” says architect Andy Groarke of the London-based firm Carmody Groarke, designers of The Box. “How should we put back together a house which has fundamental mistakes in the very DNA of its construction?” In buying itself time to answer that question, the trust has scored a novel piece of architectural engineering. Shrouded in stainless-steel chain mail draped over a silvery frame, The Box has a seductive edge—as your viewing angle shifts, the Hill House flits in and out of focus like a hologram. From its walkways, the vista of the Clyde will be unmatched. 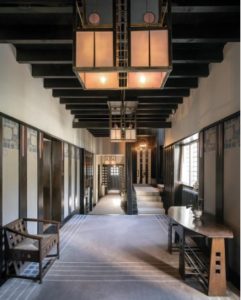 Groarke says the project was right up the firm’s street. “We have this very unusual relationship with permanence. We’ve done the Frieze Art Fair tent, civilian disaster memorials—anything between a three-day and a 300-year life span.” The chance to be in dialogue with one of the 20th century’s more innovative structures was an added gift. “Would I say that The Box has been influenced by Mackintosh? Not from a stylistic point of view, no,” he says. “But perhaps in some of the design tactics—of asymmetry, of entering the building on a minor elevation, of spatial experience, light and dark.”

Mackintosh came of age as an architect in the 1880s and ’90s, a hinge time between historicist thinking and the fin de siècle scramble for a new style. He and his wife looked back as well as forward for inspiration, equally taken by Scottish myth and Pre-Raphaelitism as by art nouveau and newly fashionable Japanese aesthetics. The Hill House and its furnishings echo all these influences and more, translated into an almost otherworldly language unique to its time and place.

Charles Rennie Mackintosh and his wife, Margaret Macdonald, oversaw the design of every inch of the Hill House’s interiors 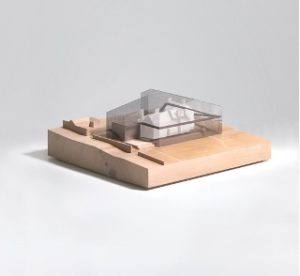 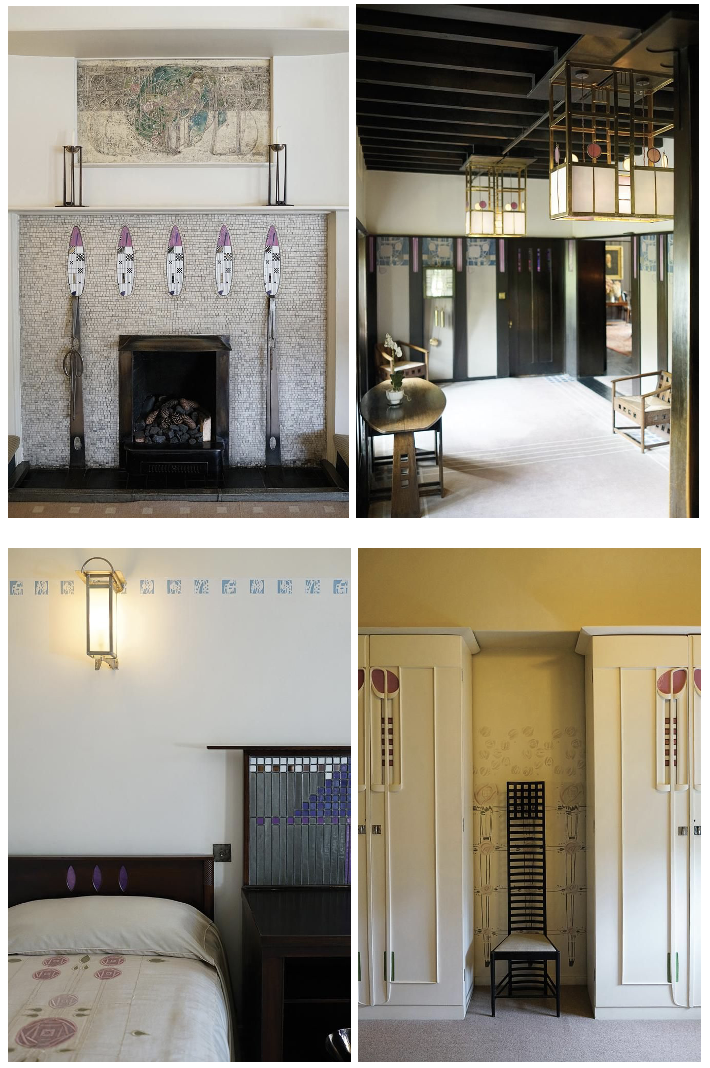 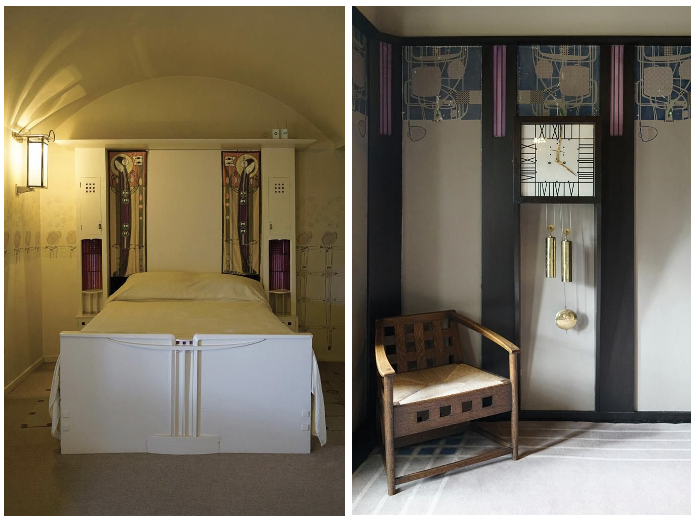 Glaswegian by birth, Mackintosh exhibited his furniture and decorative schemes in Europe but settled locally, taking whatever commissions he could find—schools, a newspaper plant, a series of temperance-era tearooms, a few private homes. Of these, a significant number have been destroyed by fire or neglect. His masterwork, the Glasgow School of Art, suffered a fire in 2014 and another in 2018, with its latest restoration still years away from completion.

A couple of blocks from the school, a reincarnation of his celebrated Willow Tea Rooms reopened last summer. Among its transporting features—ivory walls stenciled with rosebuds in violet and silver, lavender glass inlay, almost unimaginably skinny ladder-back chairs—many also turn up at the Hill House, a Gesamtkunstwerk that was never really completed. Mackintosh was still providing the Blackies with furniture in 1908, and he designed a bench for their garden terrace in 1912. By 1914, he and Macdonald had finished with Glasgow. They moved to London and later the South of France; the architect died in 1928, at age 60.

“I’ve always been kind of obsessed by [Mackintosh]… This elusive figure who built an aesthetic that will probably survive for a very long time.”

Mackintosh might have admired the economy of The Box. Form, function and decoration come together in its glittering armature; Groarke is counting on the material to spark imaginations. “If you were to incarcerate the building in plastic sheeting, visitors might become so disconnected that they’d forget about it,” he suggests. The National Trust is betting the opposite will happen: It’s raising the Hill House’s admission price slightly, to $16.50 per head. Even so, visitor fees would not be sufficient to cover the expected preservation costs, so additional fundraising is underway.

While the trust can’t say exactly how long The Box will be in place, it may amount to a decade, as layers of the facade are peeled back and repaired or replaced. And if a high-performing substitute for Mackintosh’s vaunted Portland cement isn’t found, that aspect of the restoration could be delayed until one is developed.

In the meantime, visitors will shuttle around and through the Hill House. “We see our role as creating a field hospital for this patient, if you like,” Groarke says. For him, the issue The Box addresses is “not just a technical one but a philosophical one—about how we engage people in our built heritage. In sickness and in health.”