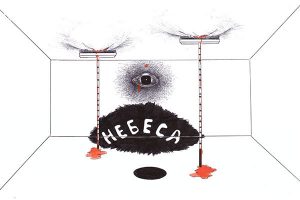 The first posthumous solo exhibition of Dmitri Prigov(1940–2007) in the UK exploring the mystical world of the genre-defying poet, artist, performer and leader of Moscow Conceptualism. Prigov was one of the leading figures of Moscow Conceptualism and is known for his varied and prolific work as a poet, performer and artist using installation, video, typewritten books and other media.

The exhibition Dmitri Prigov. Theatre of Revolutionary Action will reflect on the different ways theatricality and performance influenced Prigov’s oeuvre, focusing primarily on his work after the fall of the Soviet Union. Part of the The Future Rema Revisiting Revolution season at Calvert 22 Foundation marking the centenary of 1917, the exhibition will look back on the Soviet experiment and the ways Prigov harnessed ideological, philosophical and mystical languages to address themes of chaos, change and death.

The exhibition centres around an installation based on a drawing from the museum’s collection Series with Brooms (2000s). The exhibition will use performativity as a way of understanding Prigov’s works and the ironic mystical world they evoke. The installation, realised in collaboration with Prigov’s son Andrei Prigov, will be in dialogue with other works including a number of the artist’s early typewritten concrete poems (recently acquired by Tate), video performances and rarely seen objects and drawings from the Prigov Foundation’s collection.

Prigov created a large number of “phantom installations” that were never realised. Along with the Series with Brooms installation, which will be realised for the first time, a number of installation sketches will be displayed. Cleaning Woman and Angels is part of a triptych featuring Prigov’s recurring motif, the “Cleaning Woman”, which also features in his large-format drawing on newspaper, She and the Eye (1992), also on display. The work depicts three floating angels and a kneeling cleaning woman, overseen by a large solitary eye, interpreted by many as evoking the totalising gaze of political rule or an all-seeing God. Series with Brooms also features a solitary eye, along with an ominous bulging ceiling and long, upturned brooms, once again evoking the Cleaning Woman motif.

Providing an insight into Prigov’s Soviet period and early engagement with conceptualism, his so-called stikhogramms date from 1975–1985. These typewritten visual poems play with well-known slogans, songs and titles, such as A Spectre is Haunting Europe and Heroic Times We Lived In, and deconstruct the relationship between text, object and speech.

Prigov’s interest in found images and his playful intervention in historical scenes permeates the Flowers and Palaces series (both 1992) and is present in modified photographic works such as 1907 (2002). Furthermore, video works such as The Evangelist (2007) are typical of Prigov’s later move into multimedia performance and it is these that most overtly blur the boundaries between artist, poet and performer.

The show will be complemented by a programme of events exploring Prigov’s artistic contribution within an international context, including a one-day conference in collaboration with The Courtauld Institute of Art, spoken word performances and a series of workshops looking at the broader context of revolutionary theatre and performance in Russia and Eastern Europe.

In partnership with the State Hermitage Museum, St Petersburg, the Hermitage Foundation UK and the Dmitri Prigov Foundation