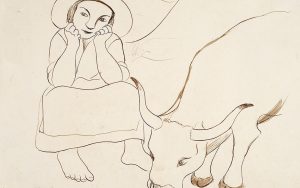 The Gulbenkian Museum is celebrating the 120thanniversary of the birth of Sarah Affonso (1899-1983), a Portuguese modernist painter whose work has not been widely researched or exhibited to date. Very often remembered as the wife of renowned Portuguese artist Almada Negreiros, she was an artist in her own right, with a remarkable career, which is revisited in this exhibition.

This exhibition examines Sarah Affonso’s singular relationship with the popular art and culture of the Minho, a region in the North of Portugal where she lived during her childhood and adolescence, between 1904 and 1915.

The region’s distinctive features – its traditions, fairs, processions and pilgrimages – lived on in the artist’s memory, and would come to feature prominently in her work from 1932 to 1933.

During this period, Affonso departed from her customary portraits in order to incorporate specific aspects of the Minho vernacular in her compositions.

The exhibition displays the artist’s work alongside examples of the ceramics, textiles, and silverwork that make up part of the visual lexicon that inspired her, some on loan from Portuguese museums and collectors.

The Calouste Gulbenkian Museum marks this anniversary together with the National Museum of Contemporary Art – Museu do Chiado, which will also dedicate an exhibition to the artist, opening in September.