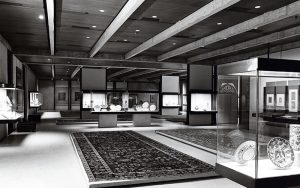 This exhibition takes the museography of the Calouste Gulbenkian Museum as its starting point, marking its 50th anniversary.

The Italian designer Franco Albini advised the Calouste Gulbenkian Foundation on the most contemporary examples of good museum design. The museum, which opened in 1969, was strongly influenced by his background in contemporary Italian design, notably that of Carlo Scarpa.

The exhibition recreates some of the period’s classic solutions to the display of art, contrasting the stasis and fixity of 1950s’ design with some of the more playful and immersive designs, by Aldo van Eyck and the Smithsons, which had already emerged by the time the Museum opened.

This exhibition allows the viewer to experience these different ways of looking at and being with art. It is accompanied by archival photographs and drawings, revealing comparative examples which are more or less like the display solutions found in the Museum itself.

The exhibition is an associate project of the Lisbon Architecture Triennale 2019. In April 2020, it will also be held at the Het Nieuwe Instituut, Rotterdam.