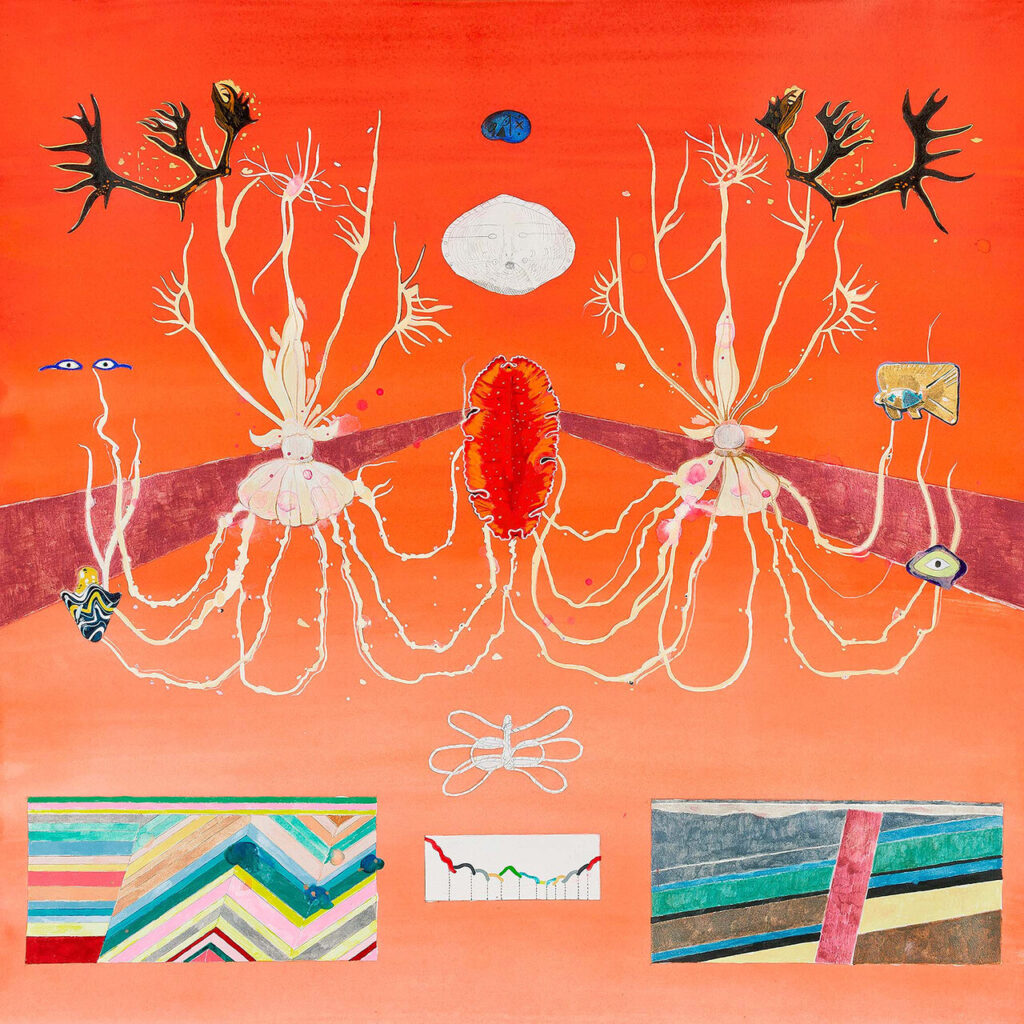 Begin by picturing a world of abundance. It would likely be lush, rich, and ancient. A topology of connections, webs, and links, a system of relations. Abundance roots our being in the world in fullness, productivity, and plurality, not only for humans but for other life-forms and life-generating entities as well. We recognize how human life is intrinsically enmeshed with that of nonhumans, how our ability to form communities depends on all those who participate in our becoming. The sensibility that emerges from abundance desires all forms of enchantment and cultivates an ethic of joy committed to the art of living together, a ground for making things anew, a space where difference and inventiveness propel new beings and things into the world.

“Abundant Futures” is an essay exhibition that presents and formulates a daring attempt to imagine worldmaking and ecological futures from the condition of abundance and fullness. It places a wealth of artistic visions and propositions from TBA21 Thyssen-Bornemisza Art Contemporary’s collection into conversation, gesturing at the multiplicity of worlds humans and nonhumans cohabit, a world of many worlds. The vast selection of works from TBA21’s collection represents different generations of artists across multiple geographies. It charts unexplored trajectories and maps out new paths for conceiving regenerative life-relations toward abundant ways of living together. Over the course of the exhibition’s long trajectory, new works will be added to it, replacing others or enriching the initial constellations.

Focusing on abundance is a matter of ontology, ethics, and ecological thought. Art, culture, and education join together to advance and reformulate ecological and visionary practices, which shape our experiences of the world. They occupy spaces for the rehearsal of social, ecological, and artistic/poetic scenarios that can alter human interaction with the planet and allow new forms of conviviality to emerge. Rehabilitating the abundance of possibilities after an age of austerity will have to be cultivated and socially enacted. It promises sufficiency and rubs against the always-limited and limiting temptations of prosperity and affluence, which are fundamentally materialistic and extractive.

“Abundant Futures” is both a visionary and somewhat paradoxical proposition. It is radically antithetical to the catastrophic predictions that define future conditions on earth. But scarcity and austerity have insinuated themselves into how we imagine our existence. The mere limitation of means and resources is equaled to scarcity, irrespective of the many possibilities afforded by negotiating and compensating for forms of disruption. Limitedness and abundance might be more consequentially related than we are led to believe. Embracing abundance can lead to a deep experience of the limitedness of human life and planetary survival. Paradoxically, limitation generates fullness, attentiveness, and care.

If we want to imagine and organize the world differently, we will have to cultivate new horizons for our politics and relations to each other. Shaping abundant futures means supporting already existing worlding practices and learning from them. It means reorganizing work fairly, redistributing what is available across vast differences, giving up what is possible to promote more life, and decreasing our productivity and wastefulness for the benefit of the commons. In these ecologically desperate days, heralding and directing our attention and devotion to what can be said, expressed, spoken, done, or imagined produces new forms of abundance. By embracing the multiple ways of being in the world, we can experience and enact abundance.

The selection of works from the TBA21 Thyssen-Bornemisza Art Contemporary Collection expresses the spirit of the foundation: the artistic, ecological, and ethical motivations behind two decades of investigation, collaboration, and experimentation nurtured by the practice of commissioning. With “Abundant Futures” TBA21 inaugurates its three-year presence in Córdoba while celebrating the foundation’s twentieth anniversary. Centering around the thought-provoking narratives encapsulated in the collection, the overall program, developed in collaboration with C3A Centro de Creación Contemporánea de Andalucía, is complemented by lectures, performances, installations, and public interventions by artists, practitioners, thinkers, and audiences from around the world, creating a new powerful nexus of debate and thinking.