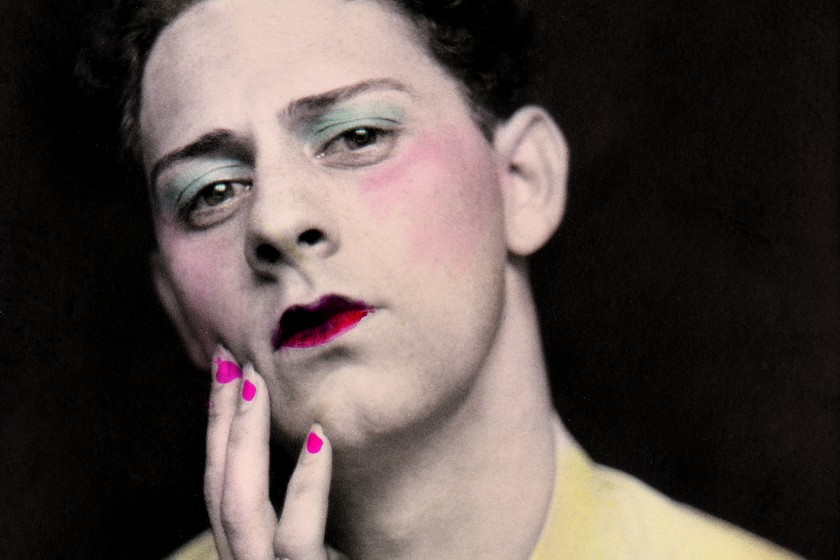 C/O Berlin examines the representation of identity, gender, and sexuality in photography in three complementary exhibitions. Ranging from historical image material that shows the act of photographing as a way to find one’s identity, a documentation of a safe space that is unique in the history of photography, to contemporary forms of expressing gender fluidity, all of which bring up the question of whether socially constructed genders are even topical today.

Since the invention of the medium in 1839, photography has not only depicted people; it has also significantly influenced their position in society and politics due to the way that photography visually categorizes people based on their physical characteristics, behavior, and clothing. By marking constructed gender roles, it also became a medium of stigmatization and discrimination.

The three exhibitions on Queerness in Photography reveal a complex panorama and show that photography can also be an act of liberation and self-empowerment. By visualizing one’s own identity or documenting the common solidarity in the queer community, new forms of artistic representation are created.

UNDER COVER . A SECRET HISTORY OF CROSS-DRESSERS . SÉBASTIEN LIFSHITZ COLLECTION

The collection of French director and filmmaker Sébastien Lifshitz shows amateur photographs he has amassed over several decades. Since the 1860s people used the medium of photography to question and challenge their attributed gender identity through clothing or physical traits and to explore themselves in front of the camera.

Without knowledge of the particular genesis or personal motivation of the individual photographs, these depictions clearly express the wish of the people portrayed to explore themselves before the camera: in addition to the rebellion against imposed social expectations and political regulations they become aware of their own identity in the photographic self-portraits.

The visual documents of the Lifshitz Collection are among the more significant discoveries of the recent history of photography, which also fill a blank in cultural memory. Exhibition produced by Les Rencontres d’Arles.

The exhibition presents original photographs of Casa Susanna from the collection of the photographer who is probably the world’s most famous artist of disguise.

Casa Susanna was a safe space for cross-dressers and trans women in Hunter, New York, in the 1950s and 1960s. Within this small community, members could together explore their identities—at a time when lifestyles, sexuality, and gender deviating from heteronormative expectations and conventions were stigmatized and even prosecuted.

The act of photographing within this community was socially volatile, since the members were documenting something that was not allowed at the time: a life outside of socially constructed gender roles as well as personal growth that was based on an individual’s own needs. The visual world of Casa Susanna reveals the solidarity within this community as well as the light-heartedness and joy of people who are allowed to be themselves.

In 1992 Tilda Swinton played the gender-nonconforming lead role in Sally Potter’s award-winning film Orlando, which was based on the eponymous novel written by Virginia Woolf in 1928.

“I see Orlando as a story about the life of a person who is striving to completely free himself from the constructs of gender and social norms.“ – Tilda Swinton

Against the backdrop of the book and the film, Swinton was commissioned by the magazine Aperture to curate the exhibition Orlando for C/O Berlin. Gender fluidity and the idea of a limitless awareness are interwoven in a totally new way within the exhibition.

The works in Orlando, some of which were created especially for the show, present various perspectives on questions of identity, gender, origin, and sexuality. Through the diversity of artistic approaches and perspectives, common concepts, forms of representation, and power relations are broken.

The exhibition program will be complemented and expanded by the Utopia/Dystopia event series curated by Todd Sekuler & Zoya. at various venues in Berlin. Throughout history, queer, trans and gender non-conforming people have used photography to create images of themselves where they lack representation, or to build alternate worlds that invite fluidity, creativity and joy. Despite an ongoing push towards inclusion and representation, many queers still tend toward creating their own worlds rather than fighting to join one that is built on the premise of their exclusion and othering. Many of the people self-portrayed or referenced in the exhibitions of Queerness in Photography have likely done the same in their respective epochs. Through the gaze and language we bring to view or describe these persons and visual artifacts, however, they are at constant risk of being flattened, appropriated, and stripped of their radical meanings. The event series, Utopia/Dystopia, curated by Todd Sekuler & Zoya., opens up questions around what happens when such images are taken out of their original contexts, submitted into an archive, and displayed in an institutional setting. What steps might we take to locate, preserve and enhance their utopic promises and potentials?

A C/O Berlin exhibition ticket for Queerness in Photography grants you free admission to all Utopia/Dystopia events, regardless of the day’s validity. Tickets may be available at the box office of the respective venue.