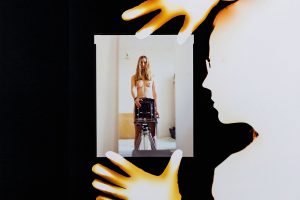 Gazing steadily into the camera, the artist holds up for view a photograph of herself in which she is depicted multiple times—in both positive and negative form—grasping a cable shutter release in her hand. In photographs and life-sized photograms printed on long photo paper banners that hang from the ceiling, Sophie Thun uses her body as a tool to examine and question established concepts of society, sex, and gender. The illusionary space of the picture seems to merge with the real space of the viewer, challenging accustomed ways of seeing.

There is a long tradition of female self-representation in European art history. Over centuries, women artists have explored their (assigned) roles, depicted themselves and the tools of their craft, and used the technique of mise-en-abyme, the image within an image. Sophie Thun’s work is part of this tradition, and her photographs contain references that go as far back as the sixteenth century. At the same time, her work addresses the precarious working conditions of young women artists in Western society today. In the series After Hours, Thun depicts herself naked in anonymous hotel rooms and points the camera at the viewer, evoking the idea of the hotel as a place of erotic fantasies. Yet contrary to what the venue suggests, she did not shoot these photos on vacation but on work trips. Like many young artists, Sophie Thun earns her living working as an assistant to successful, and mostly male, colleagues. She creates her own work at night, at locations determined by an employer, using the tools available to her there: her own body, the cable release, the camera.

Sophie Thun spends much of her time as an artist in the darkroom, where she produces photographic images by pressing her body against the light-sensitive paper. In this way, she creates shadows, impressions, and traces that she uses in constructing new images and transforms into complex arrangements in space. The medium of painting, Thun’s original artistic medium, is always visible and palpable in the ways that she manipulates and intervenes into her photographic works.

C/O Berlin is presenting the first institutional solo exhibition of Sophie Thun’s work. The exhibition brings together a selection of recent works that deal with themes of gender but also revolve around photographic representation and analog photographic techniques..

Sophie Thun (b. 1985) lives and works in Vienna. She studied with Daniel Richter and Martin Gutmann at the Academy of Fine Arts in Vienna in 2017. Her work has been shown in solo and group exhibitions at the Folkwang University of the Arts, Essen; at Camera Austria, Graz; at the Bank Austria Kunstforum, Vienna; and at the Sophie Tappeiner Gallery, Vienna. Her photographs are in the collections of the Smart Museum, Chicago, and the Verbund Collection, Vienna.