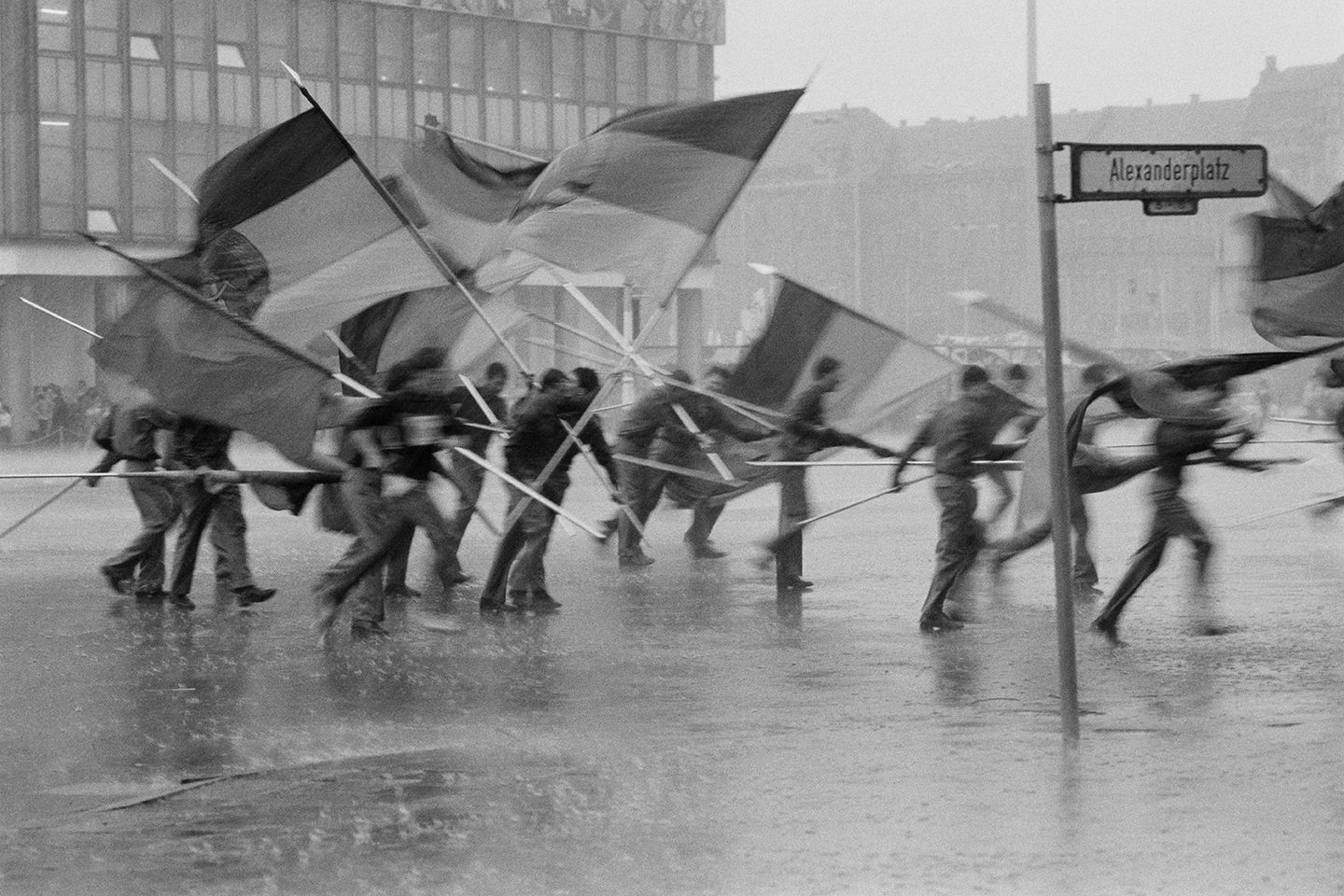 Raucous, flamboyantly dressed punks, hippies, and kissing couples in a sea of Trabi cars, confrontational banners and demonstrators at Alexanderplatz in East Berlin, shadowy figures and drunks at festivals and neighborhood bars, law-abiding citizens waiting patiently at stops: Harald Hauswald’s gaze is authentic and tender. His images radiate a sympathy for the objects and people he photographs, preserving their dignity and setting them apart from the surrounding madness and decay. The photographer shows the monotony and slowness of life in East Germany, bearing witness to an insular and isolated world shortly before its downfall. In contrast to the West’s prevalent images of the GDR as a country defined by the socialist state and the Free German Youth organization, by the Berlin Wall and barbed wire, by marches and military parades, Hauswald’s photographs offer unique and revealing insight into everyday socialist life, showing the evolving cityscape of East Berlin and the activities of opposition groups, artists, and youth subcultures.

The fact that Hauswald himself moved in these circles ensured that he was always present in his photographs, for he was a participant and not merely an observer. On his wide-ranging travels through East Berlin and to obscure spots in East Germany in the 1970s and ’80s, he laid bare the contrast between everyday life in decrepit cities and the inner emptiness concealed behind the laboriously constructed façade of the communist state. His black-and-white photographs alternate between an enchanted, playful intimacy and a sharply satirical, dispassionate gaze.

For twenty-eight days, two months, and twenty-six days, the “anti-fascist protection barrier” known as the Berlin Wall divided the city and its inhabitants into East and West. This exhibition documents the social and political lives of people in East Germany and shows the challenges arising during the shift to a reunified Germany. As a co-founder of the photographers’ agency OSTKREUZ, Hauswald is one of the most important German figures in the history of photography. His works are invaluable, forming as they do a visual record of the history of a divided Germany. The Ostkreuz Association for Photography is working to ensure the conservation of over 7,500 of his rolls of film by the end of 2020. 6,000 individual images will be digitalized as part of a major project funded by the Federal Foundation for the Study of Communist Dictatorship in East Germany.

This show is Harald Hauswald’s first retrospective. It shows roughly 250 photographs taken between the late 1970s and the mid-1990s, including a large number of previously unpublished images. His images are placed in dialogue with the contents of the file kept on him by the East German secret police, the Stasi. No other East German photographer was monitored as closely as he was. The contents of the file were contributed by around forty informants (or “unofficial collaborators”) between 1977 and 1989 under the code name “Radfahrer” (cyclist). In 1985, the Stasi issued an internal warrant for Hauswald’s arrest on the grounds of anti-state activities, violating exchange-control regulations, acting as an agent, and passing on unclassified information. Hauswald was a single father and at times, his daughter was removed from his custody. This exhibition is the first to juxtapose references to contemporary history, photography, and work.

The exhibition is curated by Felix Hoffmann (C/O Berlin) in cooperation with Ute Mahler and Laura Benz (Ostkreuz). A catalogue published by Steidl Verlag accompanies the exhibition.

Harald Hauswald (b. 1954 in Radebeul, Saxony) is one of the most eminent East German photographers. Together with Sibylle Bergemann, Ute Mahler, Werner Mahler, and others, he founded OSTKREUZ – Agentur der Fotografen, a photographer- run agency. After completing a traineeship to become a photographer, Hauswald moved to East Berlin in 1978, where he worked as a telegram carrier in Prenzlauer Berg and for the Stephanus Foundation, among other things. From the early 1980s, he regularly published photo-essays in West German periodicals including GEO, Stern, Zitty, and taz, at first using a pseudonym and later under his own name. His work has been shown in over 250 solo exhibitions across Germany, the United States, France, Italy, the Netherlands, and elsewhere, and has been published in diverse publications on East Berlin and everyday life in the GDR. He was awarded the Order of Merit of the Federal Republic of Germany (1997) and the Einheitspreis – Bürgerpreis zur Deutschen Einheit (Citizens’ Award for German Unity, 2006). Harald Hauswald lives and works in Berlin. 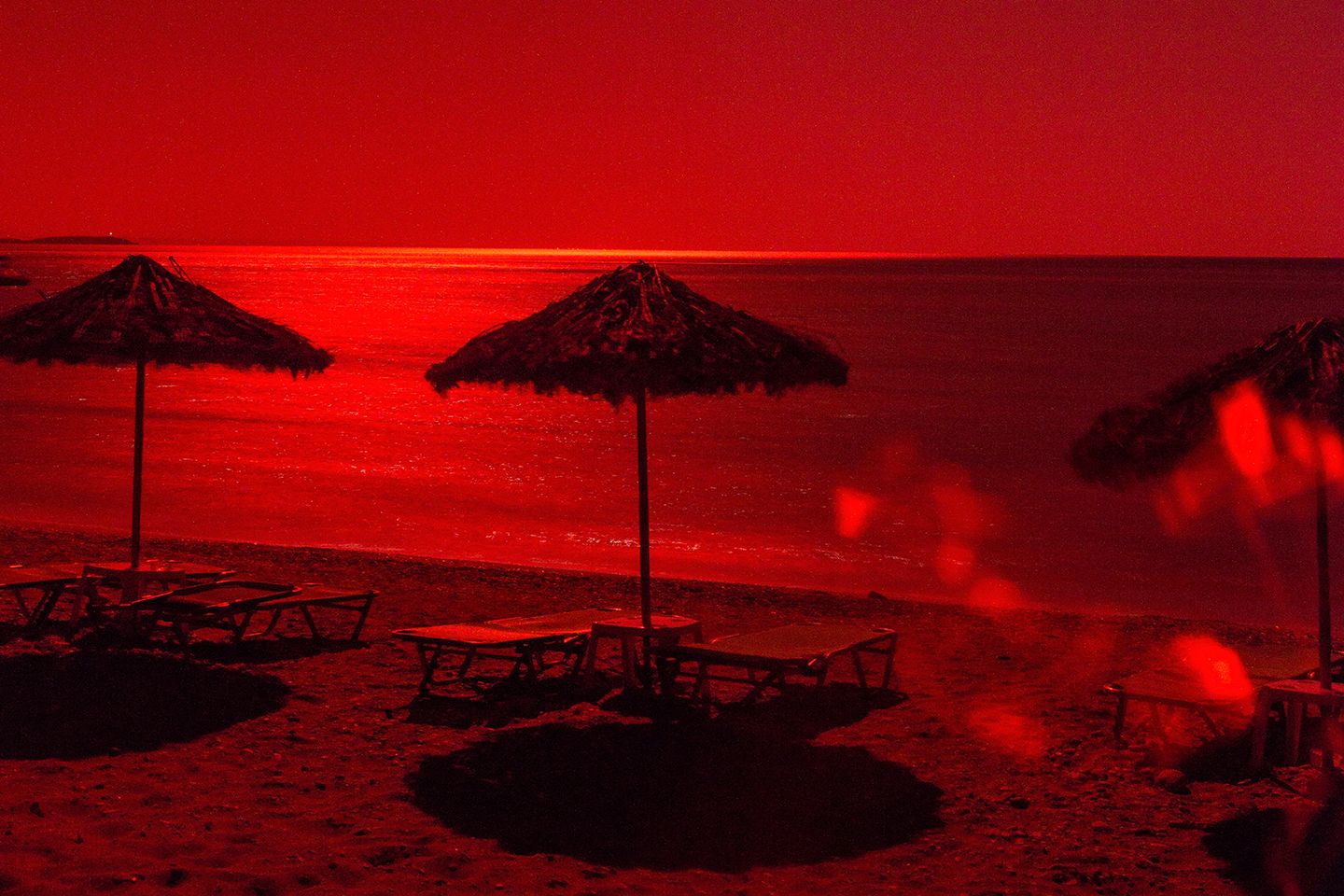 “Refugees driven from country to country represent the vanguard of their peoples— if they keep their identity.”
– Hannah Arendt, We Refugees (1943)

The sun is sinking into the ocean in a postcard-perfect view, a watermelon is being sliced up on the beach, and a gold blanket glitters in the summer heat. Yet Michael Danner’s photographs subvert our expectations and counter our clichés of a sojourn on the Mediterranean. Almost imperceptibly, they displace our inevitable associations of idyllic vacations and reinterpret summer, beach, and sea to show the threats of a humanitarian catastrophe. In the settings of our vacation fantasies, twenty-first century refugees on the coasts of Morocco, Tunisia, Spain, Greece, and Turkey are confronted with danger, loss, and death. Such gold survival blankets have been a symbol for Europe’s refugee crisis since fall 2015. According to the UN, over 70 million people around the world are currently seeking refuge—more than ever before.

Michael Danner takes a political and anthropological approach in his work, in which explorations of conflict regions and their history play a central role. His long-term conceptual documentary project with the seemingly provocative title Migration as Avant-Garde (2008–2017) is a moving, critical, and rousing work about Europe’s borders. Danner’s surprising juxtaposition of the terms “migration” and “avant-garde” stems from his reading of political scientist Hannah Arendt’s essay We Refugees (1943). Beginning with her notion of flight as a radical act of self-determination and faith in progress, Danner’s project examines different forms of migration, including freedom of movement within the EU, labor migration, emigration, flight, and displacement. Migration as Avant-Garde deftly brings together numerous visual commentaries on the current global situation while allowing viewers to make their own interpretation and avoiding explicit depictions of desperate situations. Danner’s project is a counterpoint to the conventional journalistic narrative of news photographs. Uninterested in simply informing or deliberately shocking his audience, Danner weaves together his own images, archival photographs, and quotations from Arendt to form a visual dialogue about one of humankind’s oldest actions: moving from one place to another.

C/O Berlin is the first institution in the world to exhibit this project, for which Danner received the Dummy Award at the Fotobookfestival in Kassel in 2018. The sophisticated book design makes use of layers and collage, and the exhibition translates this approach into three dimensions, with framed photographs, projected images, and designed fragments of text.

Michael Danner (b. 1967 in Reutlingen) is a German photographer who has worked for a number of magazines and agencies. Since 2016, he has been a professor of photography at the University of Applied Science Europe. He studied photo design at the Fachhochschule Bielefeld and photography at the University of Brighton. Danner has shown his work at international exhibitions including Fotofestiwal Łódź (2019), Darmstadt Photography Days (2018), Fotodoks Munich (2017), and Hereford Photography Festival (2010, 2004). Back in 2005, he took part in the group exhibition Born in the Sixties at C/O Berlin’s former location in Linienstraße. He has received support from Stiftung Kunstfonds (2012) and was awarded a grant for contemporary German photography from Museum Folkwang and the Alfried Krupp von Bohlen und Halbach-Stiftung (2018). He was nominated for the German Photobook Prize in 2014–15 and received the Dummy Award at the Fotobookfestival in Kassel in 2018 for Migration as Avant-Garde. The book was published in 2019 by Kehrer Verlag. Michael Danner lives and works in Berlin.

Smiling and larger than life, the perfectly styled single woman of the future gazes out at us. Her light-drenched luxury apartment in a glass-fronted skyscraper towers over a futuristic urban panorama. By now, we’ve long grown accustomed to such oversized advertisements and colorful billboards in the public space, to the point where we hardly notice them, at least not consciously. But still, such images cleverly play on our hopes and desires. They promote the glossy opportunities an urban life promises, albeit one that has come to seem suspiciously interchangeable across the world’s metropolises.

In her work, British artist Felicity Hammond confronts the social, political, and economic contradictions of the postmodern city, whose buildings and façades shape our collective identity and open up a future by obliterating the past. Hammond’s large- scale collages combine found images from glossy real estate brochures with her own photographs. They are reminiscent of apocalyptic historic images, but they never reveal the locations of the places they show or how they relate. Instead, the collages reflect the increasing homogenization of big cities, resulting from a process of urban development steered by power struggles between international real estate companies, profit-driven investors, and gentrification critics.

In Hammond’s work, advertising’s bold promises meet postindustrial mise-enscènes formed of car tires, construction debris, bags of plaster, wooden pallets, and abandoned materials from large-scale construction sites. It appears that – when it comes to urban planning—digitality and reality, plan and execution, utopia and dystopia exist in close proximity. Only partly framed, Hammond’s collages are often displayed open to the environment in which they are shown. The artist adapts the materials and format of the work to fit the given exhibition space. In doing so, she underscores the lack of materiality and the variability of the digital image. Lacking a fixed form, the work extends from the wall into three-dimensional space.

With Remains in Development, C/O Berlin presents Felicity Hammond’s first solo show in Germany. The exhibition draws on the artist’s monograph Property (2019) and translates elements from the book into three-dimensional space for the first time. Hammond thus brings together key works in her artistic oeuvre in a new constellation: collages and sculptural objects are displayed alongside an installation that draws attention to the chroma key process employed in film and photographic technology, used to digitally remove greenscreen backgrounds, which are replaced by other images for advertising pamphlets and posters. In parallel to the exhibition at Amerika Haus, the artist will mount a site-specific installation in the public space, in which she returns urban subjects photographed in her work to the city.

The exhibition has been co-produced with Kunsthal Extra City, Antwerp.

Felicity Hammond (b. 1988 in Birmingham, UK) received an MA in Photography
from the Royal College of Art in London in 2014 and is currently a Contemporary Art
Research PhD candidate at Kingston University, UK. Alongside solo shows in England,
the Netherlands, and Canada, Hammond has exhibited her work at international
group shows at Photographers’ Gallery (2018), Fotomuseum Winterthur (2017),
Tate Modern (2016), and FOAM Amsterdam (2016), among others. Her work has
been nominated for a number of awards, most recently the Deutsche Börse Photography
Foundation Prize (longlist, 2019). She has been awarded the Lumen Art Prize
(2018), FOAM Talent (2016), and the British Journal of Photography International
Photography Award (single image winner, 2016). Hammond’s first book, Property,
was published in 2019 by Self Publish, Be Happy. She lives and works in London.