C/O Berlin Foundation: Francesca Woodman “On Being an Angel” 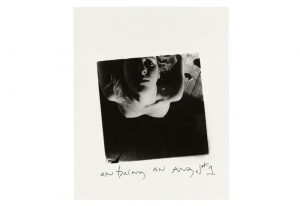 A nude body dancing in front of a mirror; clothespins that pinch a woman’s flesh and skin. What could she be doing? Francesca Woodman’s photographs document performances in which the camera is the only audience. But they are also complex and formally balanced compositions consisting mainly of female bodies, which the artist arranges in disintegrating interiors with props such as lilies, seashells, and eels—feminine and masculine symbols that she appropriates, reinterprets, and deconstructs. The artist usually appears in the photographs herself, and makes skillful use of masks and fragmentation as a means to play with identity: bodies are cropped by the image frame, and the parts that remain visible can seldom be identified as belonging to a specific person. The individual body appears physically present but at the same time angelically immaterial. Motion blurring, reflections, and figures that disappear into the background evoke a sense of melancholy, the surreal, and occasionally also the claustrophobic. Through her use of familiar historical motifs from culture, art, and photography, Woodman explores women’s numerous roles—the ingénue, the beauty, the seductress, but also the universal feminine as a medium for spiritualism and art. The photographs nevertheless retain a deeply personal and intimate quality, which is intensified through the use of predominantly small formats.

Virtually unknown in her lifetime, Francesca Woodman today belongs to the canon of artistic photography and is recognized, along with Claude Cahun and Cindy Sherman, as one of the strong female voices in photography in the second half of the twentieth century. With On Being an Angel, C/O Berlin presents the first German exhibition of a cross-section of Francesca Woodman’s work, from small-format black-and-white and rare color photographs to the late, larger-than-life works created with experimental techniques such as the diazotype. The 102 modern prints selected by the Estate of Francesca Woodman reflect all of the main creative periods in the artist’s short but intense career and are presented at C/O Berlin in dialogue with six short films by the artist.

The exhibition Francesca Woodman . On Being an Angel was organized by Moderna Museet, Stockholm.

Francesca Woodman (b. 1958 in Denver, CO; d. 1981 in New York, NY) was an American artist and photographer. Raised in a family of artists, she began taking photographs at the age of 13. She studied at the Rhode Island School of Design in Providence with the famous post-war photographer Aaron Siskind, among others, and worked for periods in Rome, New York, and Peterborough, New Hampshire before committing suicide at the age of only 22. She produced over thousands of negatives and around 800 prints in various techniques, which are now preserved by the Estate of Francesca Woodman. The first comprehensive retrospective was curated posthumously in 1986 for Wellesley College Museum and subsequently toured US university museums. In 1992, her work was presented for the first time in Europe at the Shedhalle, Zurich, and the Westfälischer Kunstverein, Münster. Francesca Woodman has had solo exhibitions internationally at institutions including Fondation Cartier pour l’art contemporain, Paris (1998), San Francisco Museum of Modern Art (2011) and Guggenheim Museum, New York (2012). The exhbition Francesca Woodman . On Being an Angel has been touring in Europe.