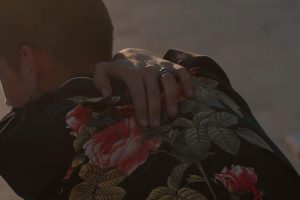 The Arco de la Victoria is a triumphal arch in the northwest part of Madrid. It was built in the 1950s at the behest of Francisco Franco to commemorate his victory over Republican troops in the Spanish Civil War. The over 40-meter-high arch stands to this day as a symbol of Spanish fascism. Lying outside the usual tourist areas in the middle of a multi-lane traffic circle on highway A6, it has long been among the city’s forgotten monuments, and is now more a ruin than a historic landmark. And like many of the city’s plazas and public squares, it is a meeting point for teenagers. In his most recent project, Sub Rosa (2017–2019), French artist Sylvain Couzinet-Jacques makes the arch the setting for his work. His large-scale video-sound installation extends a documentary approach into the conceptual realm: Couzinet-Jacques’ extremely slow-motion video oscillates between moving and still images, between film and photography. Dispersed across a number of independently edited film tracks, Sub Rosa breaks with all semblance of linear narrative. The length of the video corresponds precisely to C/O Berlin’s hours, and thus blends into the real daily routine of the place. Every visitor to the exhibition will experience a different, individual sequence of the work.

The work centers around young people. They talk, laugh, stare off disinterestedly into the distance, smoke and skate, flirt, chat, and surf on their smartphones. They wear baseball caps and hoodies, t-shirts, sneakers, and socks bearing brand names like Adidas, Puma, and Nike. Close-ups of the teenagers are combined with images of the triumphal arch and the car and bus traffic around it in the red-orange-violet glow of the setting sun. Couzinet-Jacques translates this everyday scene into an abstract picture of youth: extending his perspective beyond the young people of the Spanish capital, he portrays adolescence as a phase of inner turmoil, superficiality, narcissism, loneliness, and contradiction. At the same time, he unmasks this image as a commercial tool used by the world’s biggest fashion empires to market their products. By engaging with a specific social group, Sub Rosa creates an enlarged space for experience where photography expands into film, documentation into illusion, and distanced observation into the real experience.

Sylvain Couzinet-Jacques (b. 1983, Sens, France) lives and works in Paris. He studied at the École Supérieure des Beaux-Arts de Marseille, graduating in 2010, and the École Nationale Supérieure de la Photographie in Arles, graduating in 2012. His works have been exhibited at Le BAL in Paris, Fotofestival Mannheim-Heidelberg-Ludwigshafen and Aperture Foundation in New York. In 2015, Couzinet-Jaques held a fellowship at the Centre Photographique d’Ile-de-France in Paris, and from 2014–2016 he was artist-in-residence at the Cité Internationale des Arts program in Paris. In 2015, he was awarded the first Immersion Award by Fondation d’entreprise Hermès and Aperture Foundation. His first book, Eden (2006), was produced in collaboration with Fred Cave and published by Aperture. From 2017 to 2018, Couzinet-Jacques held a fellowship at the French Academy Casa de Velàzquez in Madrid. Most recently, he was selected as a 2019 Foam Talent by the Foam Fotografiemuseum Amsterdam.