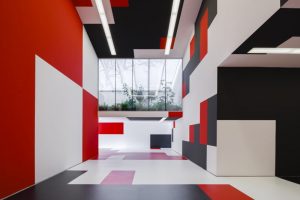 On the occasion of P. Struycken’s eightieth birthday, Kasteel Wijlre estate shall realise a unique transformation of the Hedge House. The transformation consists of a painting that covers all of the building’s floors, walls and ceiling. The red, black and white areas of colour will change the experience of the architecture of Wiel Arets, who designed the Hedge House. Struycken already designed such a transformation in 2005 as part of the exhibition A Guest + a Host = a Ghost at the Kasteel Wijlre estate. Struycken has never before realised a painted work on this scale, and for the first time, the Hedge House is using its space for a spatially all-encompassing artwork.

Alongside the transformation of the Hedge House, a solo exhibition of Struycken will also take place in the estate’s Coach House. And for the first time since the establishment of Kasteel Wijlre, the castle itself will be open to the public. Jo and Marlies Eyck, the castle’s residents, will open their doors every Sunday. Visitors can admire a three-dimensional colour space by Struycken in the form of jacquard woven curtains all around the dining room. The exhibition in the Coach House presents Struycken the pioneer, who, since 1969, has been using computer technology to create art. In the 1980s he began developing programs to generate dynamic three-dimensional colour spaces and vibrant lighting for architecture. The exhibition includes his first computer works such as LINE from 1977 and VARA from 1989 and his most recent work.

Struycken makes work in the tradition of geometric abstraction, based on patterns and systems. On the one hand, he visually examines the relationship between colours, and on the other, he uses algorithms to change the place of colour in space and time. The rapid development of digital technology has enabled him to handle increasingly complex programming, resulting in images of a greater visual directness. This is made possible using software by D. Groot, F. Van Manen (Klankschap), and D. Dekkers (cThrough). The outward form of his work ranges from the geometric abstract to the spatially hallucinatory, resulting in associations to natural phenomena due to its similarity in visual variation.

As well as working in various media, such as painting, drawing, and moving image, Struycken’s works are also applied to architecture, theatre, and music. In 1981, Struycken designed a famous postage stamp with a portrait of the then Queen Beatrix, made up of numerous dots in equal sizes. It was a unique design in Struycken’s oeuvre since figuration doesn’t typically feature in his work.

Collaboration with the Groninger Museum

Kasteel Wijlre estate will collaborate on this project with the Groninger Museum. From 29 June 2019 up to and including 9 June 2020, they will be showing a work that Struycken created especially for the Coop Himmelb(l)au Pavilion, for which he developed a ‘dynamic colour image’ that is projected onto five large screens and is based on the composition … explosante fixe … (1971/93) by the French composer Pierre Boulez.

Kasteel Wijlre estate’s strong bond with Struycken reaches back several decades. The art collectors and founders of Kasteel Wijlre, Jo and Marlies Eyck, purchased Struycken’s early works in which colours are the building blocks in vivid and often hypnotic compositions. Struycken was one of the first artists to use computer technology to design his work and has been one of the most prominent artists in the Netherlands since the 1960s.