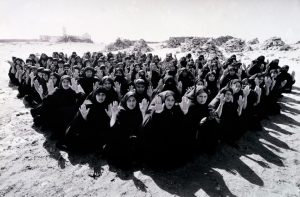 In an increasingly small world that spans politics, culture and commerce, The Broad will present an interpretation of the elusive globalizing forces at work in contemporary society in Oracle, a free collection installation this spring that will fill the museum’s first-floor galleries with more than 30 works from the Broad collection.

‘Globalization’ is a term now in the forefront in politics and the media, but for decades, contemporary artists have represented it in their work, responding to and decoding its many forms. Oracle looks at how artists have anticipated the forces that have real consequences in our daily lives yet can be obscured from direct view.” – Joanne Heyler, founding director of The Broad

From everyday experiences to protest movements as monumental as the Arab Spring uprisings across the Middle East, to themes that probe systems of social control or examine global commerce, artworks in Oracle tackle the effects of organizational frameworks on global events and private individuals. Some works in the installation symbolize marketplace machinations, both official and unofficial, while others are meditations on games, surveillance, vast data sets, mathematical and biological patterns, and even the logic of art itself. Just under the surface of the works in Oracle is an air of anxiety, as if individuals’ freedoms within these manmade phenomena are illusory or beyond reach.