Broad: 2116 Forecast of the next century 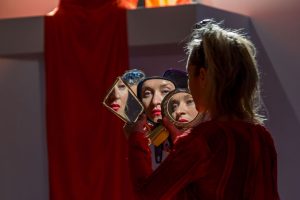 Amanda Coogan, Rock, what’s the matter with you, Rock, 2016. Courtesy of the artist.

On April 24, 1916, Irish Republicans led an armed rebellion, “the Easter Rising,” seeking to end British rule in Ireland and establish an independent Irish Republic. The men and women of the uprising envisioned a new Ireland as a national democracy that, in the words of their proclamation, “guarantees religious and civil liberty, equal rights, and equal opportunities to all its citizens, and declares its resolve to pursue the happiness and prosperity of the whole nation and all of its parts, cherishing all of the children of the nation equally.” The uprising was suppressed after only six days, yet it initiated a movement that resulted in Ireland’s independence six years later. In 2116, sixteen contemporary Irish artists offer a forecast of what lies ahead, from a vantage point rooted midway between the Easter Rising and the imagined Ireland of the twenty-second century.

Artists have long occupied the roles of visionaries, seers, and innovators, but predicting the future is a necessarily contingent and perhaps even impossible feat. Many of the works on display reflect the inherent uncertainty in long-term forecasting, while others present distinct images of what is to come. However, what links them all—and aligns them to the dreams that inspired many in the Easter Rising—are the artist’s vision, the sense of possibility, and the chance to look at the world around us differently than we did before.

One hundred years after the Easter Rising, as Ireland navigates its place on the periphery of a transforming Europe, this exhibition provides a platform for dialogue and conversation, and a way for Ireland to begin to imagine what its future might hold.